Yesterday was a fairy tale ending and an end of an era for the Burrow clan.  After ten years of a Burrow kiddo swimming for the Weston Red Tide it ended with the MIAA Division 2 State Champs at Boston University.

I am quite sure there will a blog in the future about the Tide program but this blog is dedicated to the fairy tale season of 2017-2018 and Courtney’s swimming and leadership success. Strong swimming has been in Courtney’s bones for a long time but due to circumstances and injury it didn’t fully bloom until this season.

Starting the season Courtney had never made a sectional or state cut or score individual varsity points–that changed in a big way.  The path to success started with pre-season swimming, regular weight training at the gym with a trainer and classic Courtney goal setting, planning and determination.

As the season started it became obvious that she was a stronger swimmer and that this  was going to be a great year!  Let me share a few milestones of the season.

A highlight for sure in many ways was making her first sectional cut.  It was in the 50 free at the big dual meet rivalry of Weston vs Wayland.  This is a big meet as its two days before Christmas and many alumni swimmers are in the house. In this case, namely Courtney’s two big brothers Ryan and Sean.   If there was any meet to get your first cut at it would be this one in front of a roaring crowd and to have your brothers there to watch. An early Christmas present for the whole Burrow clan-for sure. 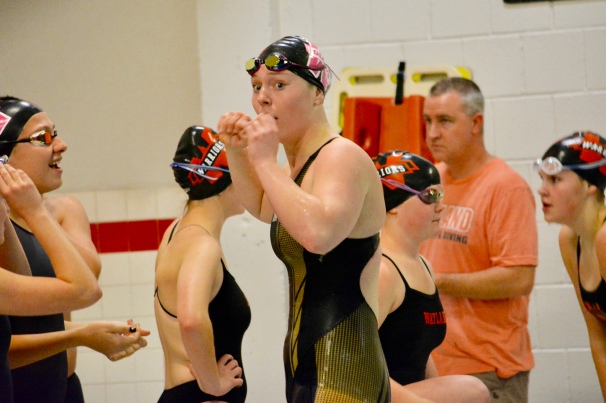 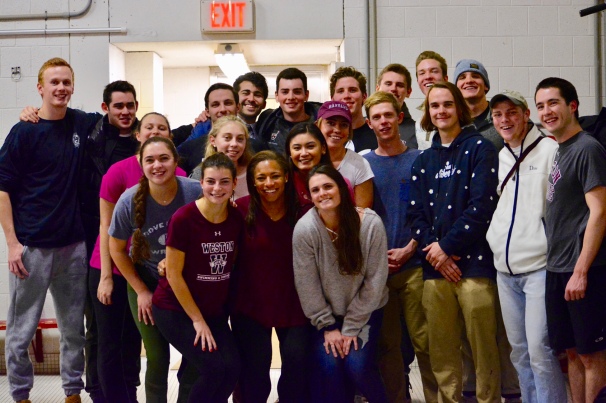 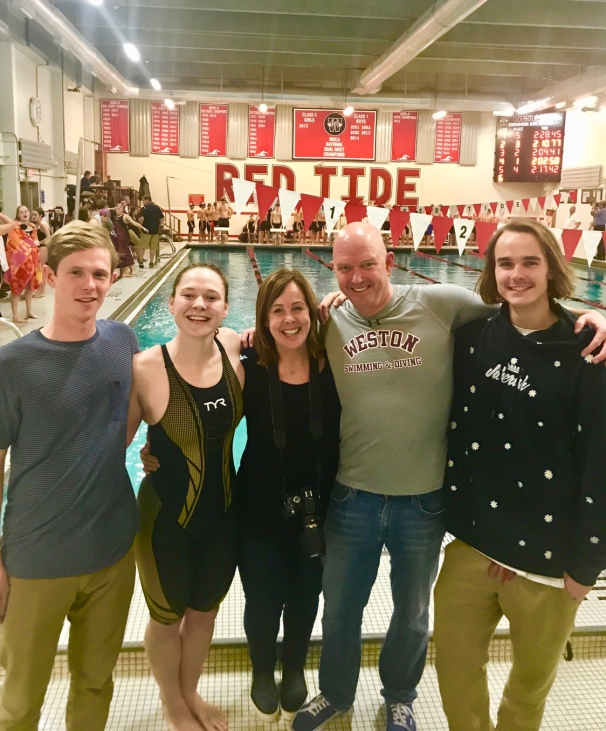 Next up, is Senior Day another fun meet as its the seniors last duel meet in their home pool. The meet starts off with a nice ceremony for the seniors and their parents recognizing their achievements and ends with cake on the pool deck. 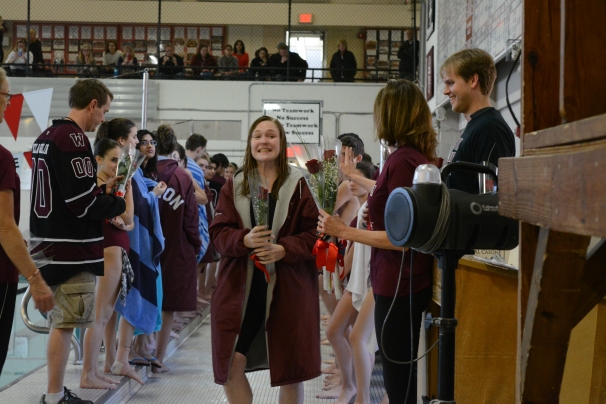 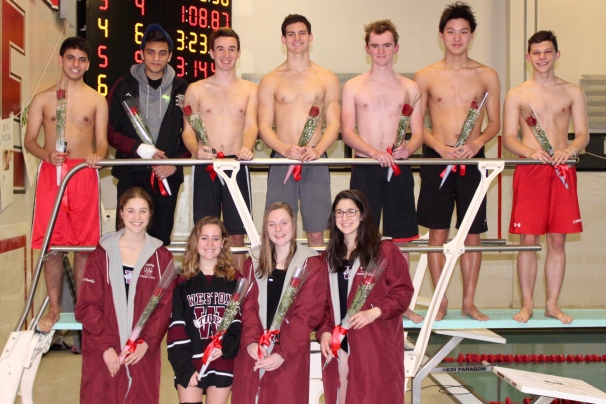 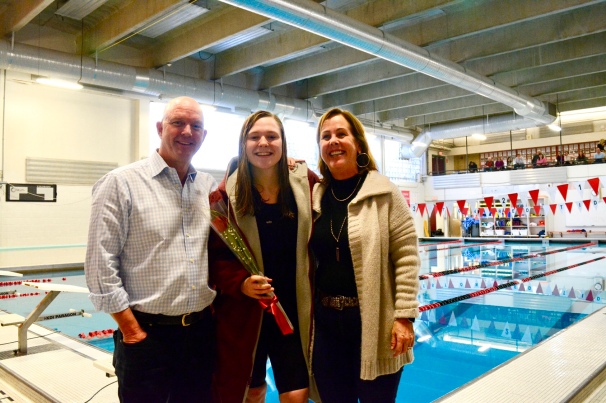 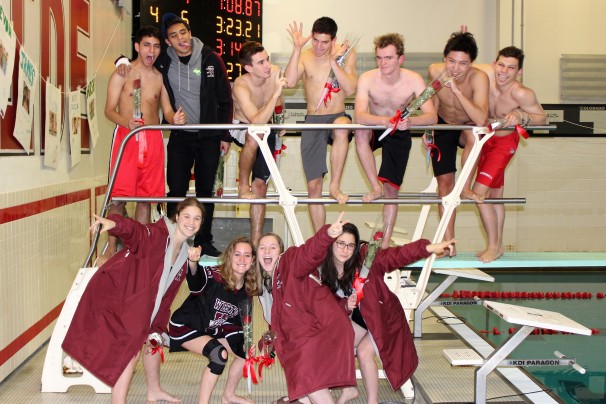 In between, is where the work gets done and Courtney did her job!  At this late point in the season Courtney had piled on five sectional cuts but was still reaching for that first ever state cut. Sure enough she made it in the 50 free.  I will never forget her face when she looked up at the score board and saw that she made it! Lots of smiles, hugs and a huge sigh of relief by all. 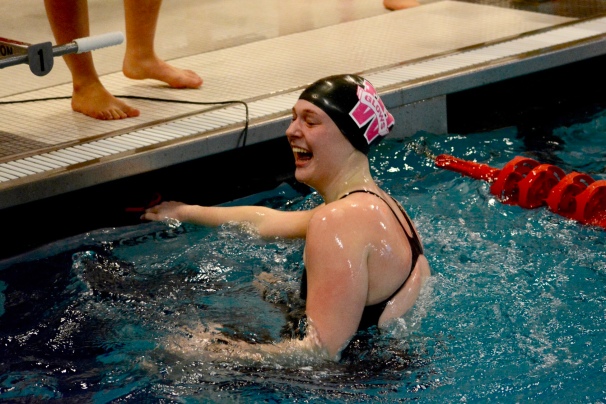 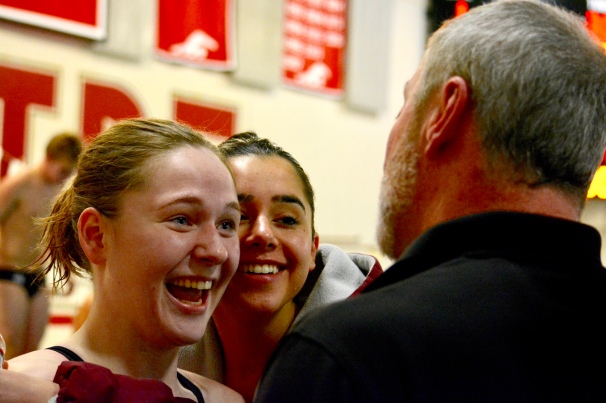 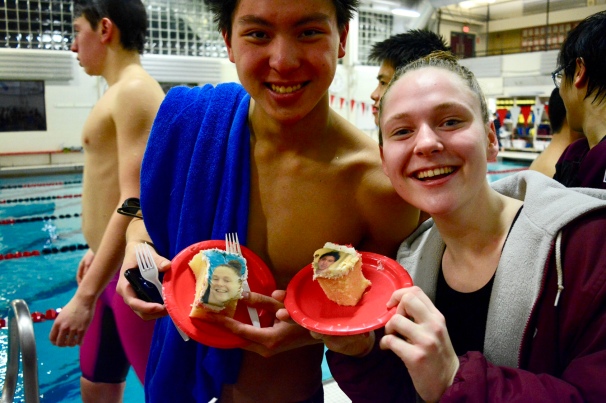 Lastly, it was Courtney’s overall performance in and out of the water for the championship season of Sectionals and States.  When I say “out of the water” I am talking about the hidden training of sleep and diet.  Her feats here were nothing short of Olympic. For two weeks straight she was getting at least 10 hours of sleep, ate very healthy and cut out all sweets.  First up was sectionals at my home pool at MIT. When I saw the girls warming up in “my lane” I knew it was going to be a good day.

Courtney was going to swim in the 200 medley relay, the 50 free and the 100 fly.  This was a big meet as she wanted to qualify for states in the 100 fly and she had to compete with her team mates to secure a spot individually in the 50 free at states as there is a limit as to how many girls from a team can be in each event.  Courtney swam a great free leg in the medley relay with a blistering rolling start split of 25.53 to move us up two positions to sixth place.  Two events later she was back on the blocks for the 50 free and put in a 25.88 with a flat start-her best time.  She solidified her state spot-yes!  The 100 fly was well swum despite a gulp of water in the last ten yards and just short of the state cut.  The GLOW’s had a great meet winning second place overall. Off to States! 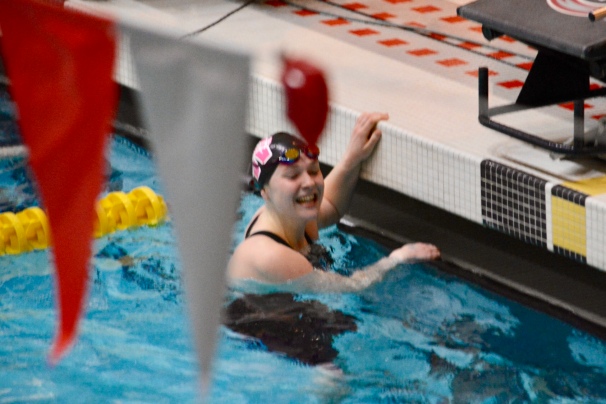 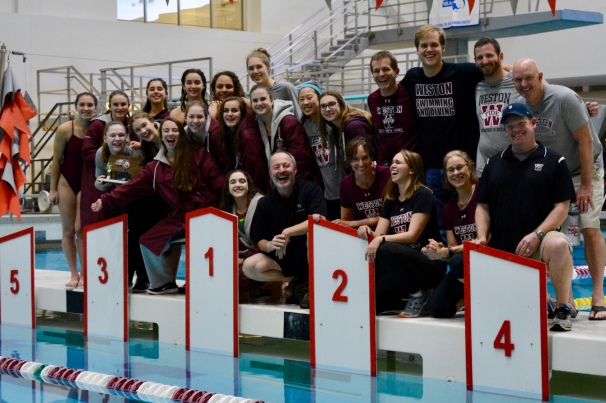 The state meet was at Boston University and Courtney was on deck to swim the the free leg in the medley relay, her individual 50 free and then she needed to compete for a slot on the 400 free relay.  You could feel the excitement in the air at BU’s natatorium by the spectators and athletes a like with the ceremonial entry of the seniors and the singing of the national anthem.  The team was ready to go!  First up was the 200 medley relay and Courtney swam a strong 50 free rolling start time of 25.59.  The girls got third place in the event however there was an early relay exchange and they were dq’ed.  Tough way to start the meet but it focused the team quickly.

Next up for Courts was the 50 free. Walking to the blocks she looked confident and calm.  There were three Weston girls swimming side by side in her heat.  With fast starts by all they all looked good in the water. Courtney touched the wall with a 25.58 her best ever! You could tell by the smile that she was very happy.  She got 15th place to boot and scored points for the team-a big and important goal for her. 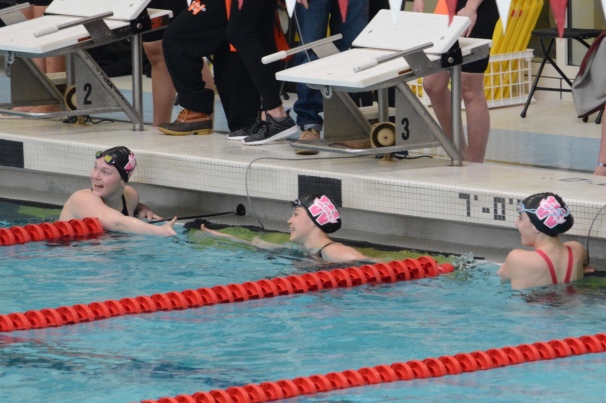 The team was looking strong throughout the meet with some good swims/dives to make up some points from early on.  It was decided late in the meet that Courtney would swim in the 400 free relay. She would be swimming the anchor leg. It was a great race with lots of back and forth and in the end the girls got 5th place.  To have the great season that Courtney had I could only think to myself how fitting that she was in the last event of the meet, the last leg of the relay and was the last Weston swimmer in the championship pool~wow! 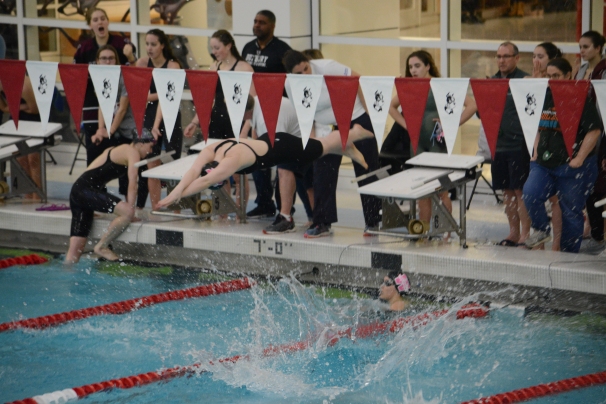 The girls got second overall in states. This was huge after a rough start. They were all so proud and happy as they stood on the podium receiving their hardware. Last year the GLOWS graduated five extremely talented girls and team leaders and to think this group stepped up the way they did was a huge feat. 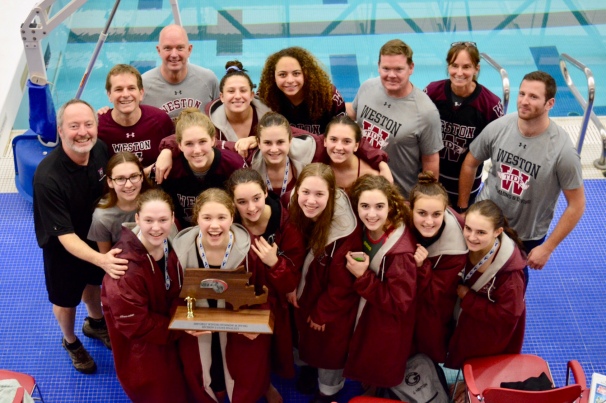 Who would have thought at the beginning of the season that Courtney would make four sectional cuts, a state cut, to score relay points in sectionals, to swimming in one individual event in states and to be on two relays and to score points individually and on a relay?  There is was one person that thought it possible…and it was-Courtney! Actually, I think she surprised herself. 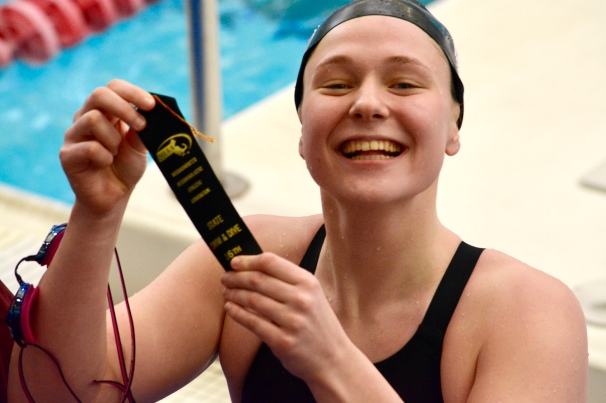 Beyond the swimming itself Courtney stepped up big time and was a true leader on the team.  She took initiative in planning psyche ups, planning events and was a go-to person for the coaches and was an inspiration for the team. We couldn’t be much prouder of her as a swimmer and  young adult.  It shows what happens when you work hard and shoot for the stars.

So that’s it for the 2017-2018 Tide season and the Burrow fam’s day to day personal involvement with our kids on the team. It has been quite a ride!!!

I will leave you with a pic of Courtney and I at the last swim practice (day before states) for a Burrow kid at the Pete Foley Natatorium at Weston Middle School.

Thank you Tide and thank you Valz! 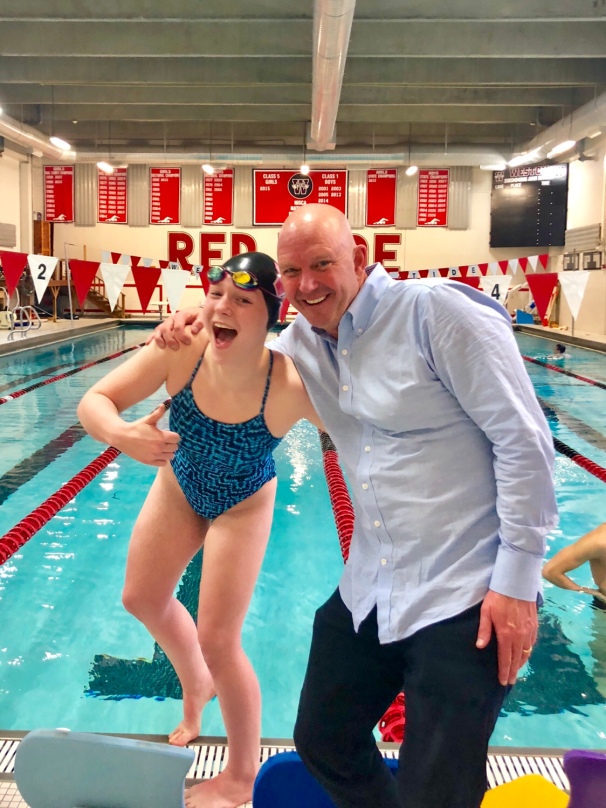