We all have friends that we believe will stick with us in thick or thin but it’s not often when you see it in action. In fact this training session it was really going way, way above and beyond!

In preparing for the English Channel there have been challenges along the way like trying to find a pool if I am traveling or not being able to swim enough because of work obligations and I am sure there will be more of that to come. The big stressor has been getting my 6-hour qualifier swim completed. It’s a requirement that all solo swimmers need a solo six hour swim in water temps below 60 degrees. Living in Boston coming out of a long winter and coolish spring the harbor has been in the low 50’s. I wasn’t going to subject myself to that torture. I was stressed about getting it done soon to get it off the check list and before the local waters spiked up above 60. So was time to take the show on the road? I thought of flying to San Francisco to swim in Aquatic Park or even flying to England for a quick trip to Dover Harbor. With a little Google work, the right water temp and encouragement of a good friend it was off to a familiar open water swimming hole of Westport, CT on Long Island Sound. 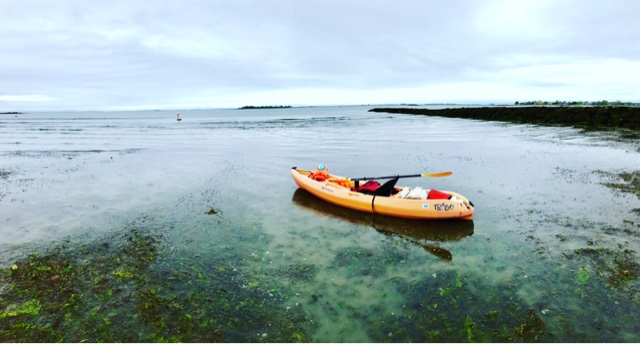 My good friend Andy and crew member for my Channel swim suggested that I come down and swim off of Compo Beach and he would kayak for me. I struggled a little bit with it at first as I was hoping the water would be around 59/60 degrees and it was only 57. With the encouragement and pushing of Andy I decided it was the right time to get this qualifying swim-done.

I got to Andy’s house around 9:00pm on a Thursday night with the intent of shoving off from Compo before 8:00am. We chatted about logistics and did the food prep for the both of us. You wouldn’t think it would be that complicated but when you are in the ocean and in kayak for six hours there a lot to take into consideration. When I went to bed around 11:00 it was raining and thundering outside-a bit ominous for our morning adventure. We got up around 5:30 to a cloudy and drizzling morning. We pressed on and decided if it was too miserable we abort the mission and try another day. 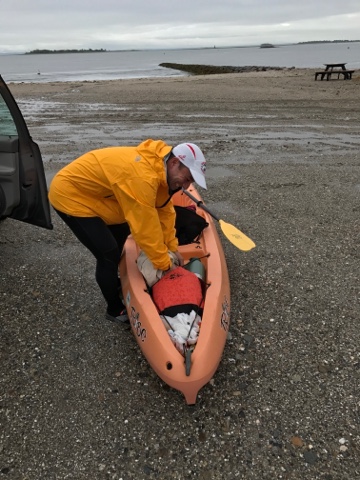 The tide was out and Long Island Sound was fairly calm.  We got the kayak off the car and got our provisions loaded up. With some laughs along the way about our ensuing adventure and some strange looks by passer-byes and a shriek as I entered the water we started just before 8:00am. 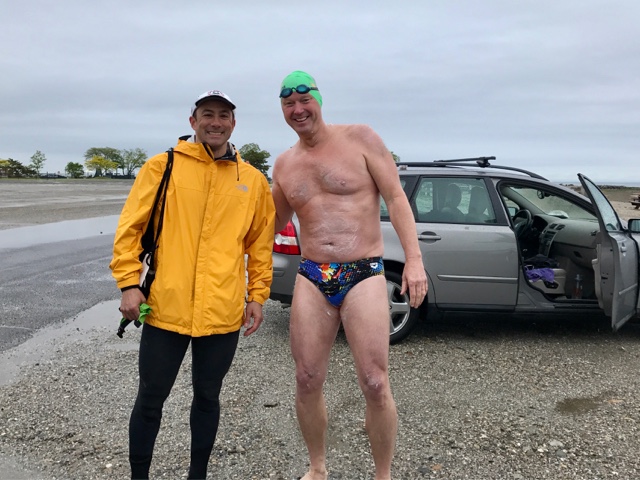 No doubt the water was chilly and within the hour the rain had stopped but it remained overcast much of the day. The plan was to have a warm feed every 30 minutes. It took a couple feed to get the kinks out and then we settled into a solid routine. I very much looked forward to the feeds to get something warm in my body and to have somebody to talk to. Andy, was so attentive to making sure I drank the whole drink and have everything prepared on time so I wouldn’t have to tread water in the cold for too long.  He even counted my strokes along the way to determine a baseline of when it looked like I was slowing and got tired.  We slogged on for about 2.5-3.0 hours past Sherwood Island, Southport and up to Fairfield before we turned around to head back. There were a few times where there seemed to be a strong tide against us where it felt like we were going nowhere. We were much closer to shore on the return trip and it was fun to see the huge mansions along Long Island Sound.  It was even more entertaining to see Andy doing some type of yoga moves on the kayak to work the kinks out from sitting for so long. In fact, at one point it is rumored that he may have fell asleep in the kayak for a moment.

I was so happy to see Compo Beach and the lifeguard shack was we made our way back across Mill Pond. By the time we got to the beach it was just over 6 hours.  Mission accomplished! 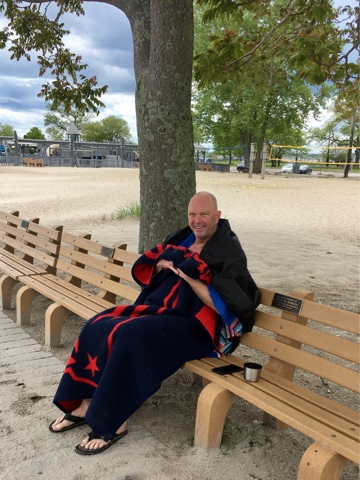 All in all, it was a good day.  I was able to practice feeding, got in a long solid swim and importantly began the cold water acclimatization process in earnest.  There times I was quite chilled but not enough throw in the towel.  This was my first time in cold water for a meaningful swim so I felt real good about the accomplishment and certainly getting the 6-hour qualifier completed. Big stress relief off my back. 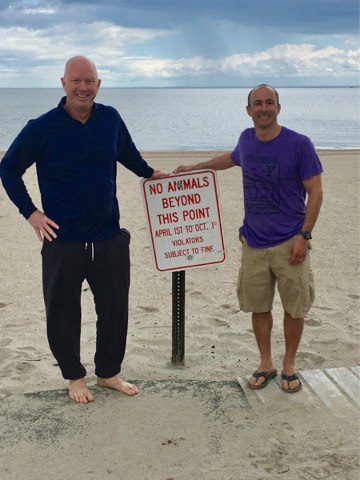 Some say that swimming is an individual sport but those “in the know” certainly understand that it is far from that and when it comes to long distance marathon swimming it is truly a TEAM sport. I would have never completed this mandatory 6-hour swim if it wasn’t for my good friend and kayaker Andy! Thank you Andy!

Postscript:
Two weeks later I connviently had a business meeting near Westport so I was able to sneak in another swim at Compo beach in 58 degrees.  Yes-Andy was there this time without his kayak but with his cap and goggles. We swam for two hours from Compo Beach up past Sherwood Island. It was a big swim to start the day.  A gorgeous morning and great place to swim! 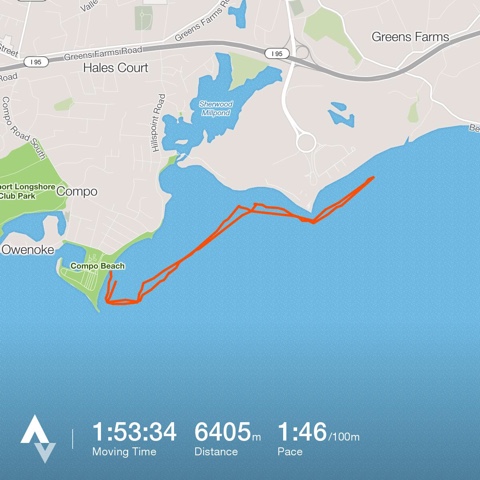