Into the night we did go and go and go…for 6 hours and 50 minutes in the pitch dark black of night!

It’s been two weeks since the swim and I haven’t been able to find the creative prose to describe this experience so I will just try to be direct and to the point.

The swim was across the Santa Barbara Channel from Anacapa Island to Oxnard-12.5 miles. It wasn’t part of the 2016 original swimming plan but in early August Chloe McCardel, English Channel swimmer extraordinaire, called to say she was organizing a swim tour of California and this was the final stop on the tour and it would be good training for the English Channel. I was in! 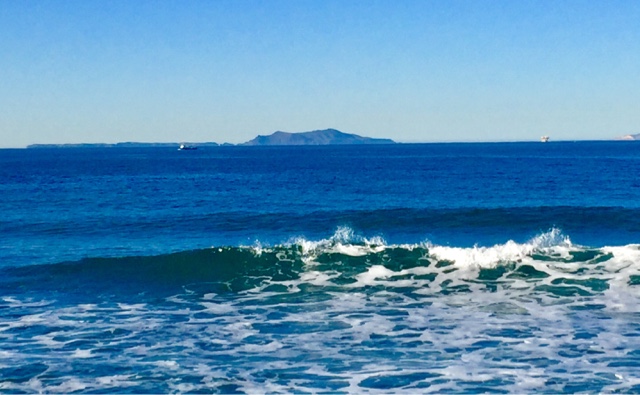 I met up with a small group of swimmers from Portland, Oregon and the Mojave desert. We were suppose to start our swim early on a Thursday morning but due to weather our swim was postponed. On Thursday, we had a brief training swim at Silver Strand beach and I swam side by side with my tandem swimming partner Cindy. The water was cool but not horrible.

Later that afternoon we found our our swim was on for early Friday morning. When I say early, I mean like 2:00am early! Wasn’t expecting that.  The balance of the day was spent resting and getting some last minute supplies. I had an early dinner and hit the sack around 6:00pm to get a few hours of sleep.  We met in the lobby of the hotel at 10:30pm and made our way to the harbor. At the harbor we met up with the boat captain, his skipper and the official from the Santa Barbara Channel Swimming Association. The guide boat was a sail boat so it would take us about two hours to motor out to Anacapa Island. I filled out some paperwork, was read the official rules and then went below deck to take a nap. My concern was getting sea sick on the ride over so I thought it was best just to sleep. 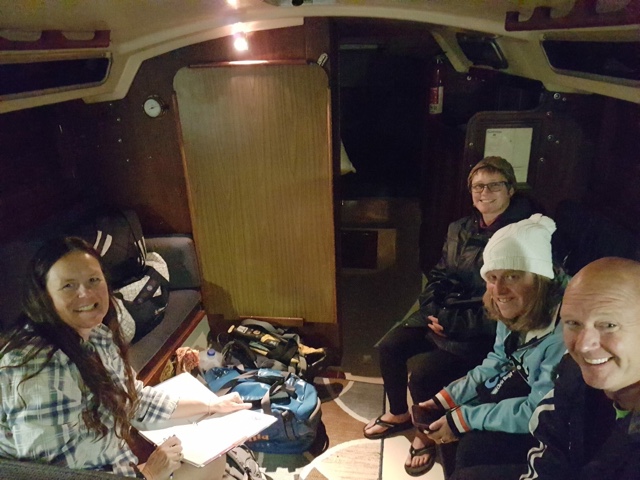 The plan was for me to swim next to the boat and to take my feeds from Chloe off the boat. Cindy would swim next to me and her kayaker would be on the outside and would supply Cindy her feeds. We would feed every 30 minutes.  Just before 2:00am we pulled up close to the start.  It was pitch black outside and the boat didn’t want to get to close the island.  We attached glow sticks to our swim suits and it was–go time! Cindy jumped in and I followed as we swam probably 50 yards through some kelp to some big rock arch on the island we had to touch to officially start the swim. I was told it was an arch but I never really saw it as all I could see was the glow stick on Cindy and the glow sticks hanging off the back of the boat in the distance. 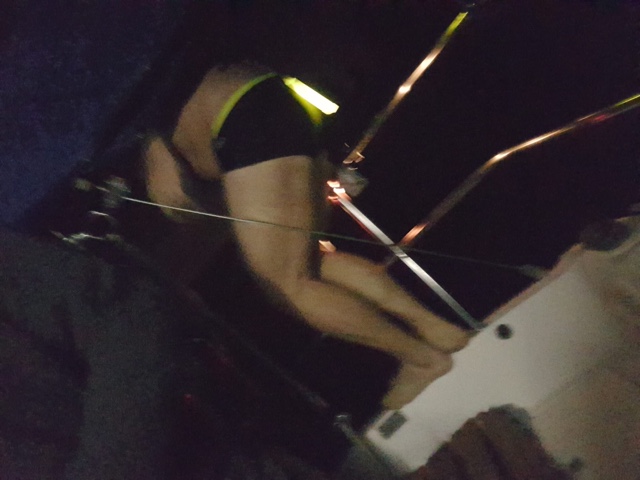 We touched the wall, shouted to the boat that we were starting and we were off!  The water 63 degrees. I guess the cold water open water swimming I had done in preparation along with cold showers paid off as it really didn’t feel too bad when I jumped in and started swimming. It actually felt nice.

This is where I will try to keep it short as there isn’t a whole lot to write about when you are swimming in the Pacific Ocean hour after hour.

Swimming at night in the ocean was a new sensation. While I had swum in the English Channel for an hour at night it was a different story swimming at night off the coast of California for nearly five hours!  Breathing to my left it was very cool to see the star filled night and to my right the glow of the the boat, and looking up past the mast to the moon and the stars.  The coolest part was the seeing the bioluminescence in the water as my hands sliced through the water stroke after stroke.  I won’t lie my mind did wander more than a few times thinking about what could possible be down below me. Your mind can take you weird places at night.

Cindy and I were fairly well paced with each other and I our feeding schedule every 30 minutes seemed to work. The warm feed mix of UCAN and GU’s were easy to take down fairly quickly. Unfortunately, after 3 hours Cindy had to get out of the water. She was just too cold and couldn’t keep it up.  I felt bad for her as it was a hard decision being that far into the swim. So it was just me out there all by myself. That was a bit of weird feeling at first.

Aside from the finish there were two other strong memories. First, about 2/3rd’s of the way from Anacapa there is oil rig Gina.  From the distance it looks like a brightly lit spaceship. I used it for sighting and something to swim towards. The closer I got it the more brightly lit it appeared and I could hear the motors of the oil rig in action. 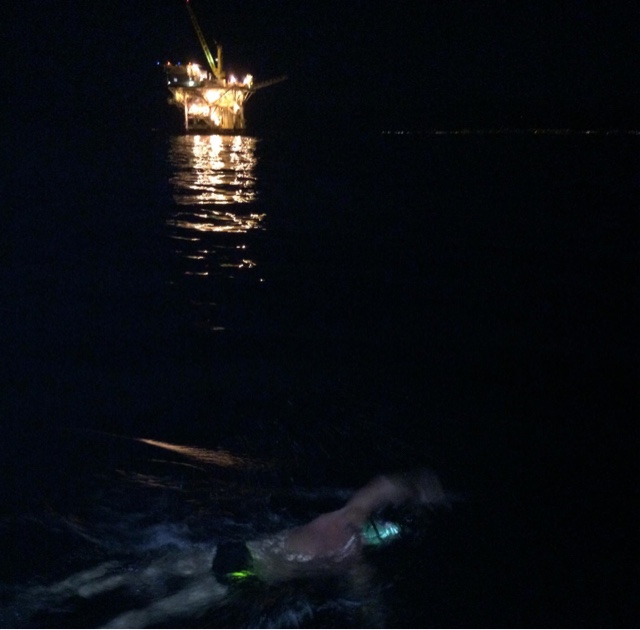 The second, thing was the sunrise-thank God! It was a much needed mental break from the dark night and a motivator. It couldn’t get sunny, quick enough. Things are always better in the light of day. Oddly enough the water began to feel a bit cooler then. It wasn’t bad but I certainly noticed it. Later I learned the water temp dropped to 59 degrees. 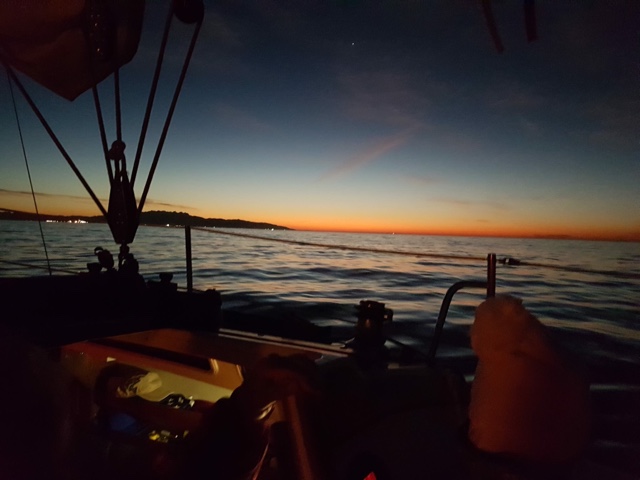 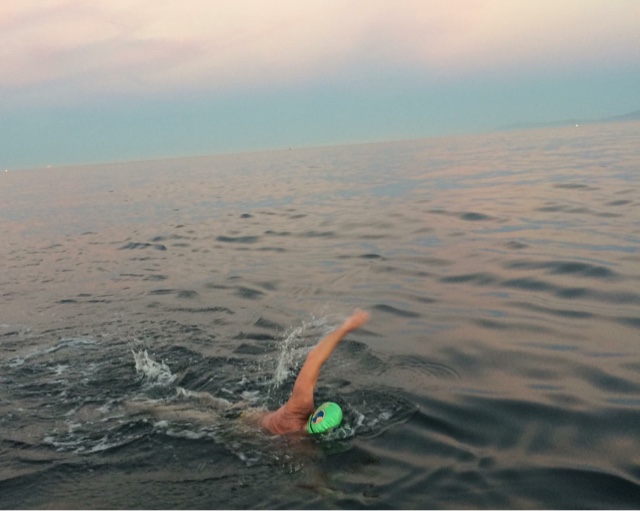 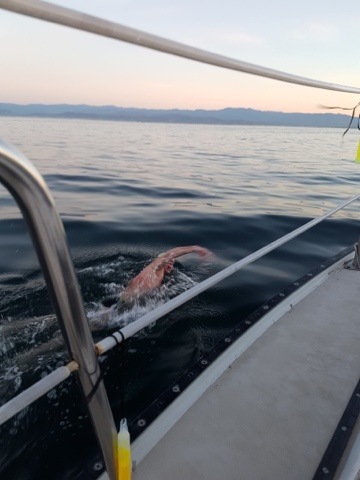 The finish was suppose to be at Silver Strand beach where we had trained the day before but there was a high surf advisory with massive waves. They didn’t want the sailboat to get to close to shore but they didn’t want me in a fatigued state to fight the waves swimming to shore let alone try to fight them swimming back out to the boat. It got a bit intense for a bit as they were trying to figure out where to land me. I had no idea what was going on. The crew just told me to swim.  I did what I was told as the current against me got stronger and stronger.  Hollywood Beach was the new destination and with some maneuvering between the jetty and the boat I finally made it to shore. I cleared the water line, raised my arms, the air horn sounded,I did a quick jig on the beach and I got back in the water (ugh) and swam very, very slowly back to the boat. Mission accomplished!!! 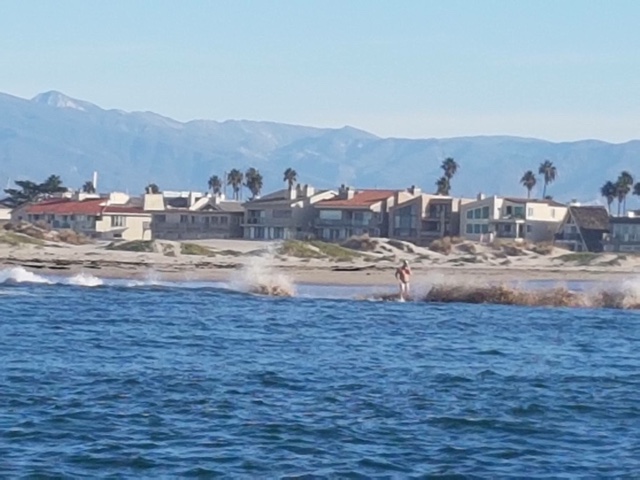 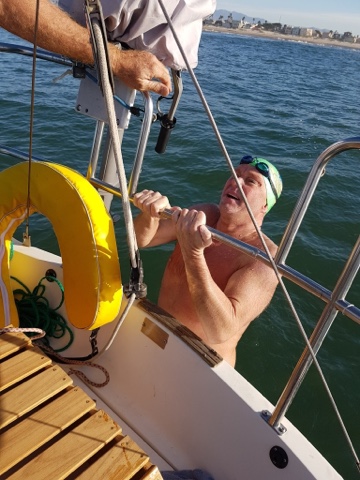 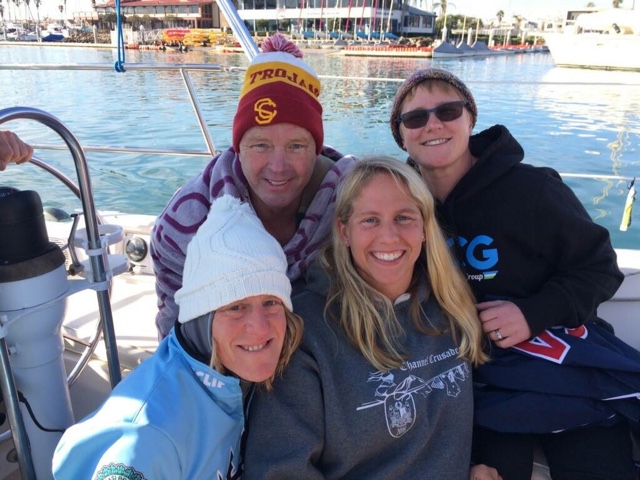 I was pleased with myself and the swim but it took a bit more out of me than expected. Importantly, there were some good lessons learned for future long swims.

-Liquid aspirin is better than pills

-Learned how to swim at night

-Work on my stroke technique

-Have a mental game plan for when things get tough/boring

-Mental game is likely more important than the physical game

-Be prepared for possible changes in the game plan 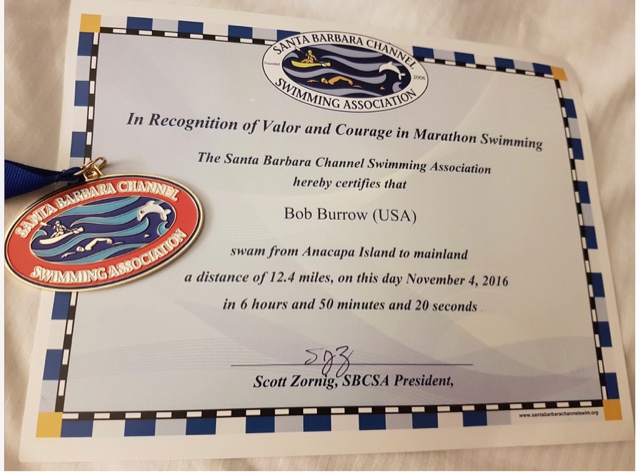