Swimming wise 2016 has started off with a bang!

I have been tracking my swimming via my USMS Fitness Log (FLOG) since 2011 and January 2016 has started off as a record year. This month I swam 21 days for 27 hours and for a total of 83,951 yards or 52.3 miles!
My goal for the year is to swim 450 miles. According to the FLOG I should be at 38 miles and I am already at 52 miles. It’s always good to bank some miles as I know there will be periods where I am not able to get a swim in.
January is USMS’s annual One Hour Swim Challenge where all USMS teams encourage their swimmers to swim an hour straight and the region with the most yardage wins. MIT Masters squeaked our swim in on the last day January 31st. We didn’t have necessarily robust participation this year but those that were there, were “all in”. I timed the first hour for my friend, Dr. Bob and swam the second hour. Before we started I swam an easy 50 for warm up-not much of a warm up.  I swam a total of 4475 yards in the hour. While I wish I would have hit 4500 yards I was pretty pleased as I swam 125 yards more than I did last year! 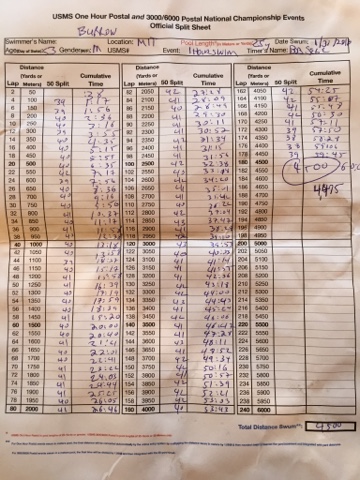 Post swim I went to Anna’s Taqueria and had a burrito and went home for a nap. It felt great!
The other important swimming related event for the month was that I confirmed my marquee swim of the year-swimming the Strait of Gibraltar from Spain to Morrocco in June.  My application and deposit have been sent in and my plane ticket has been purchased. I will be swimming with my friend Grant that I met in 2014 as part of the SAA English Channel swim and my soon to be new friend Clint. This swim is highly competitive to get in with a long waiting list. Clint was kind enough to let Grant and I swim off the front of his boat with him for this swim.  Clint has a great story for doing this swim. He is a history teacher in inner city Birmingham, Alabama and they were studying the importance of the Strait of Gibraltar when the idea of the swim first came to life.  One of his goals is to show his students that if you dream big, work hard an ordinary person can accomplish great things. What a great lesson for young kids!  Looking forward to the training and getting to know Grant and Clint better.
Another special swimming event was that Sean had his last home swimming and diving meet this week. It was celebrated at the annual Senior Day event honoring the leadership of all the seniors. At the ceremony Sean was called out as the only swimmer/diver to score points in the state meeting in both swimming and diving in the program’s history. Big deal! He threw a triple flip as his final competive dive in his home pool. Yet another first for the program! We are very proud of Sean and look forward to continued great things and firsts at CU Boulder this fall. 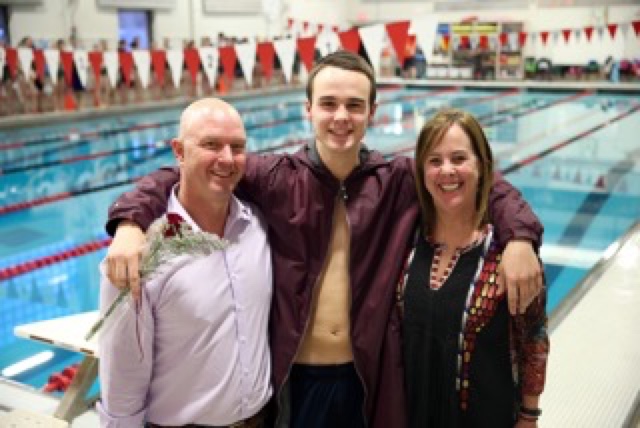 Here is to exploring new pools and open water adventures as the rest of 2016 unfolds!
Like last year my goal is contribute to this blog at least twice a month.