In the early 1800’s the European aristocracy toured Europe with their families staying in some of finest hotels of their day. Why not try the same with pools and open water at these grand hotels? While I am not an aristocrat I am certainly a pool connoisseur. For a journey this grand Lady Shannon joined.

First up was the Hermitage Hotel in ritzy Monte Carlo. The hotel was built between 1890-1896 by Gustav Eiffel and Nicolas Marquet in the Belle Époque style of that period. The swanky hotel was set on a bluff overlooking the blue Mediterranean. How can you be on the Med and not take a dip in the sea? 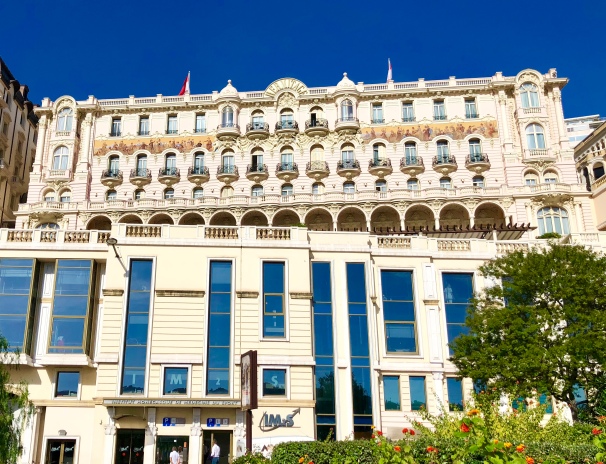 Lucky for me the Plage du Larvotto was a short 15 minute walk from the hotel.  The weather and the water was c’est magnifique!  I could have swum there all day long.  Fortunately, I was able to get in a couple of open water swims at “la plage” during my visit. 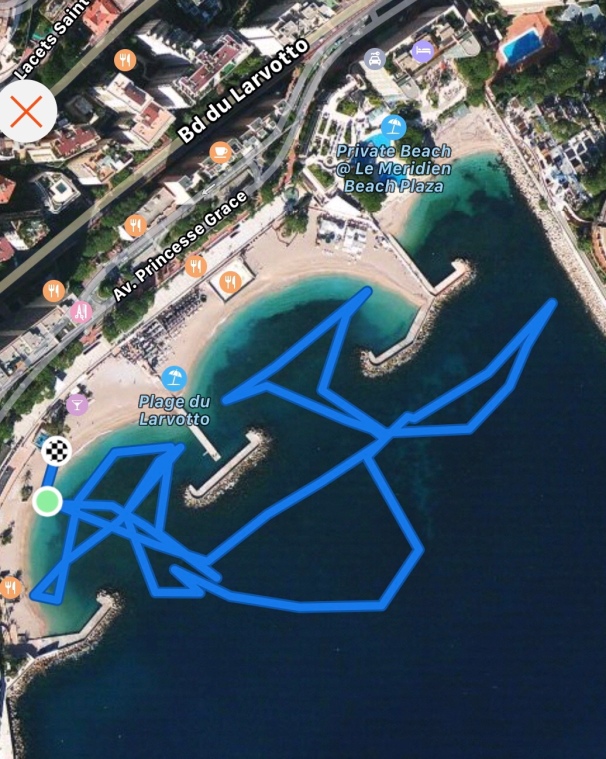 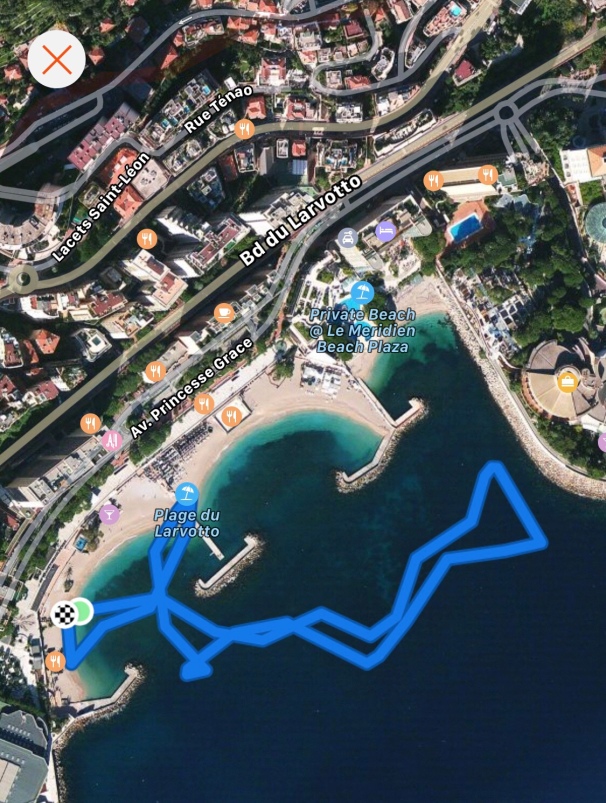 Certainly I couldn’t leave the Hermitage without some laps in their luxurious pool.  Oval in shape it was still long enough to count as a “qualifed pool” for my pool quest.  I had to dodge some “spa go’ers” however I persisted nonetheless.  No doubt, I will be back to Monte Carlo in the future as a couple of great outdoor 50 meter pools were closed for the season. 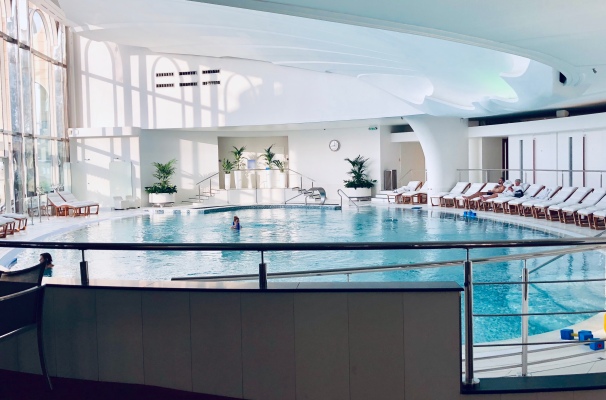 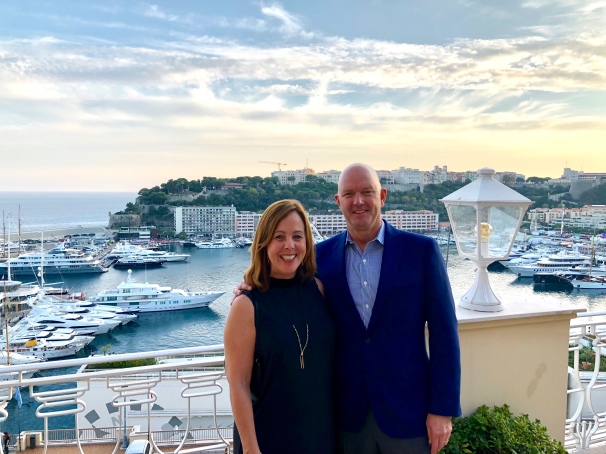 After a motor coach ride and a short visit in Milano we arrived at our second stop on this grand tour-Villa D’Este on Lake Como in Italy. There is only one word to describe what we encountered~bellissimo!  Villa D’Este was built in 1568 by Tibaldi Pellegrini as the summer home for the Cardinal of Como and was considered one of the finest works of Italian architecture in the 16th century.  The hotel, the grounds and the setting were over the top.  Seeing George and Amal couldn’t have even compared. 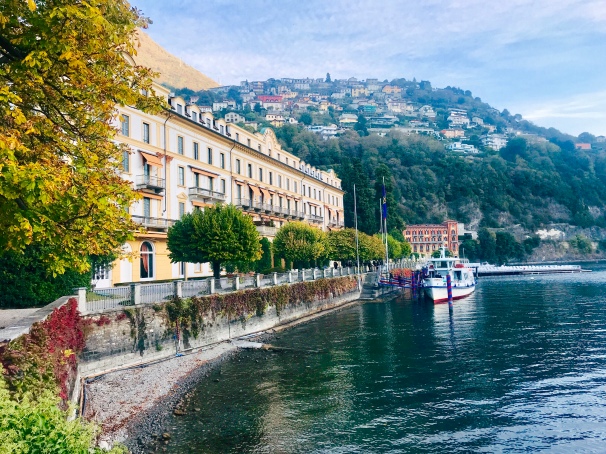 Fortunately, for me there were tré bodies of water for me to conquer; the indoor Sporting Club pool, the outdoor floating pool set in the lake and then the lake itself.  I hit the indoor pool early in the morning and it was just fine.  The ultimate was the two outdoor bodies of water.  By all accounts they should have been closed but due to some good weather they were open for business.  I was really lucky as two weeks before I was told by the concierge that they were closed for the season.  The floating pool felt very unique and luxurious in the setting. My open water ambitions were grand however ended up being somewhat muted as the pool staff wasn’t wild about me venturing to far afield. 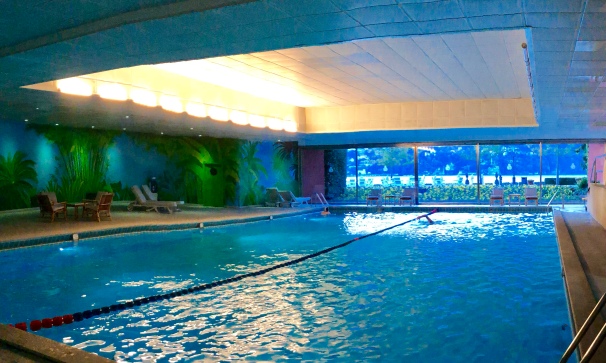 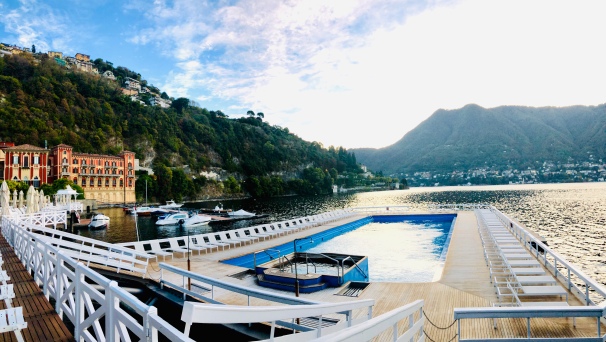 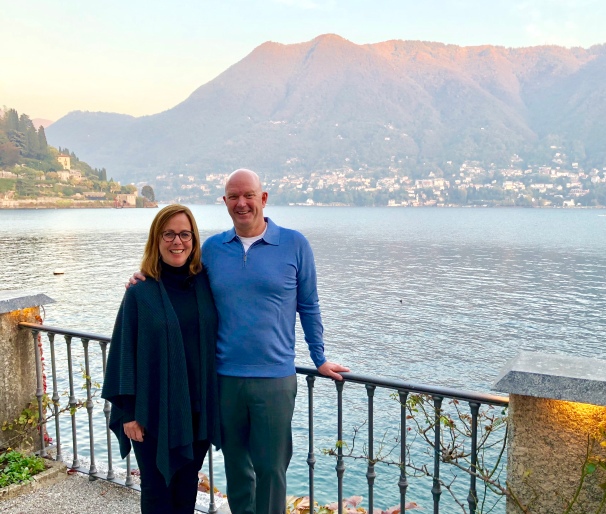 After a luxurious and fun private train ride through the beautiful Alps we arrived at our final stop the Beau Rivage Palace in Lausanne, Switzerland. 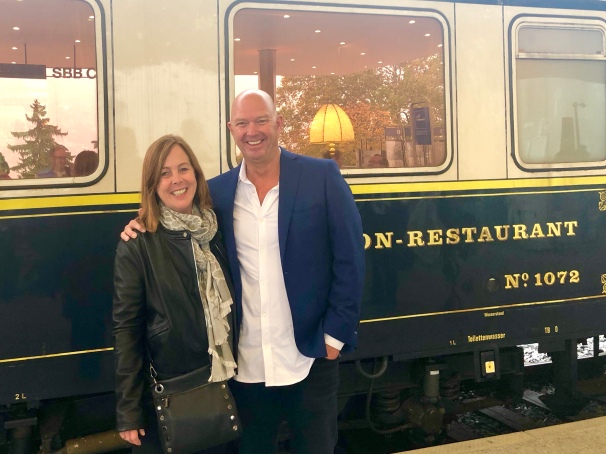 The hotel was built by Jean-Baptiste Bertolini in the Belle Époque style.  It’s an elegant setting on Lac Leman where two important international treaties have been signed. The Treaty of Lausanne in 1923 that basically divided up the Ottoman Empire and the 2015 Iran Nuclear Treaty.  Oddly enough Lady Shannon and I stayed here twenty years ago on a work trip. It felt like coming home~kinda. 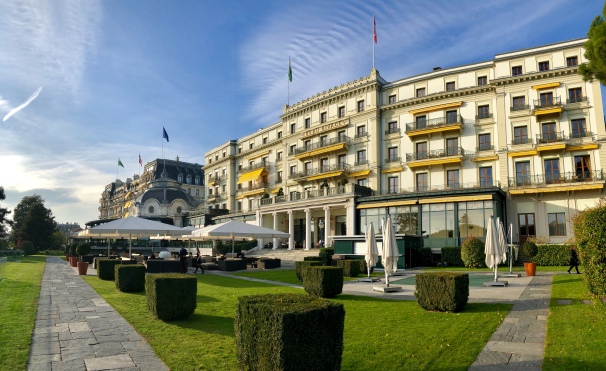 Despite the weather getting cooler and somewhat overcast as we headed north into Switzerland I had two more bodies of water to conquer. The hotel’s spa and pool sits on the lower level with spacious gardens with a peek of the lake only a hundred meters away.  There is a warm indoor pool and a bit cooler outdoor pool.  I obviously chose the outdoor pool.  It was dark and raining when I went early in the morning (unlike the picture below).  I had the pool to myself so it didn’t matter that there were no lane lines. I could swim wherever I wanted.

After a couple days of chocolate making, fondue eating and hoping for the weather to turn nicer I realized my dip in Lac Leman would be a bit “fresh”. 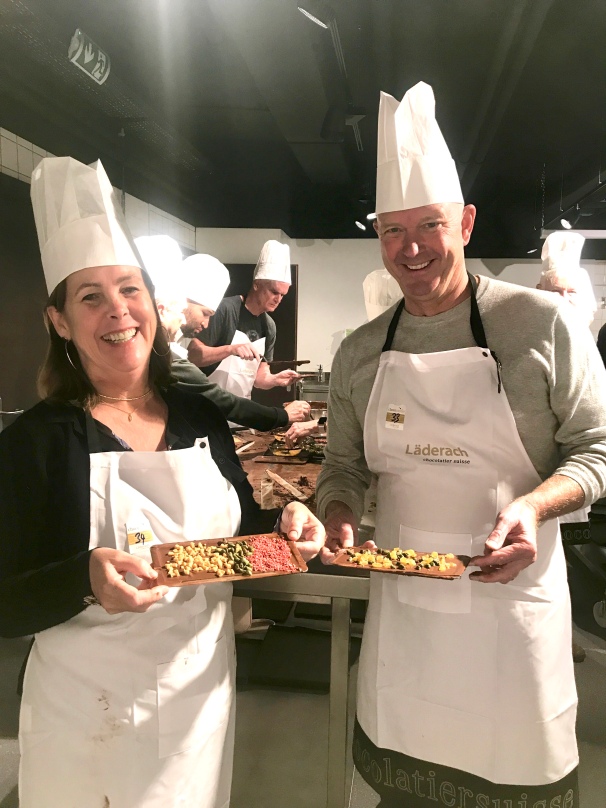 The morning of our departure was “go time” and I was able to convince Lady Shannon to serve as my attendant lakeside.  It was a bit tricky getting in the water as it wasn’t a beach but I managed.  We did have some strange looks from passer-byes as open water swimming sans wetsuit in late October in Lausanne isn’t really a thing.  It was a “refreshing” swim and once acclimated quite nice however it was brief as my attendant was patiently (kinda) waiting for me. There was also a train to catch.  My only regret was we didn’t start earlier so I could have enjoyed the lake longer. 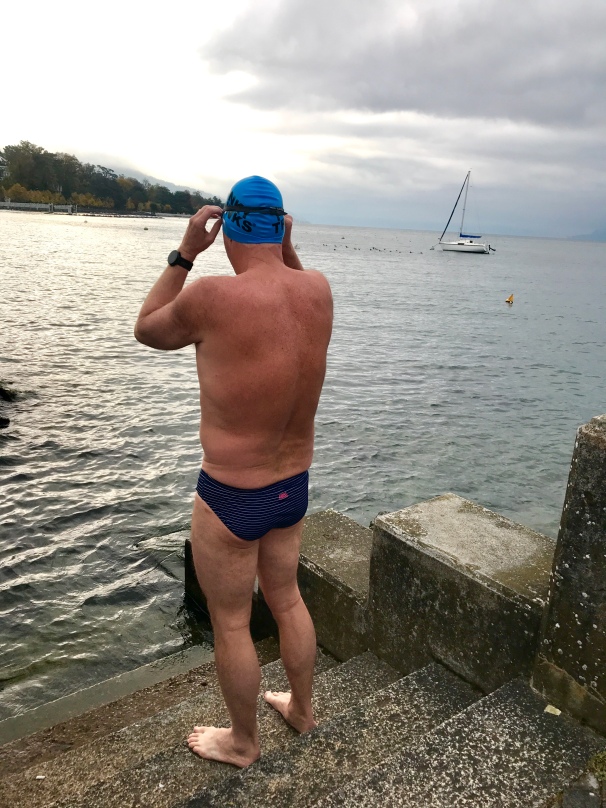 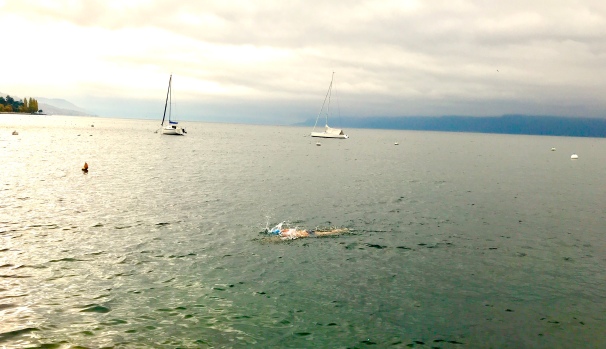 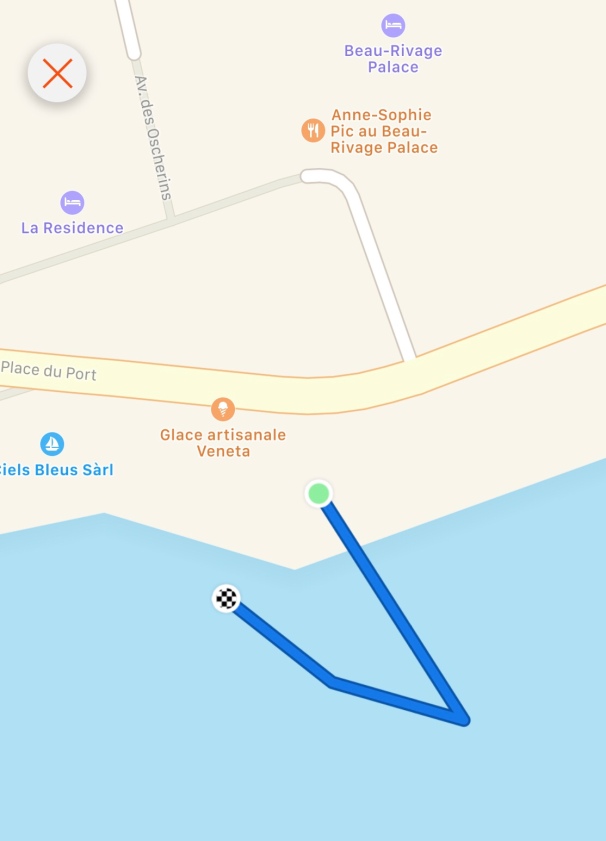 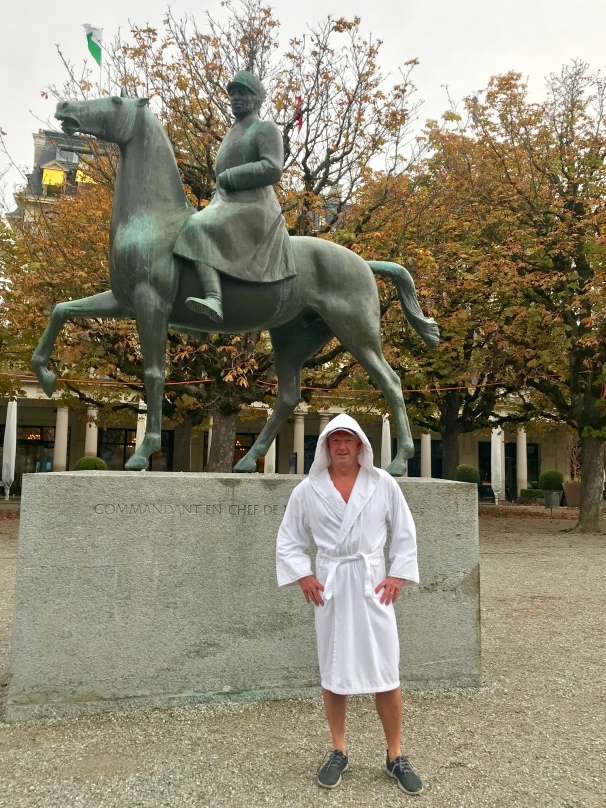 Living like an aristocrat both in and out of the water for a week wasn’t too shabby.  I could get used to this way of life quite easily. Looking forward to doing it again someday…soon. 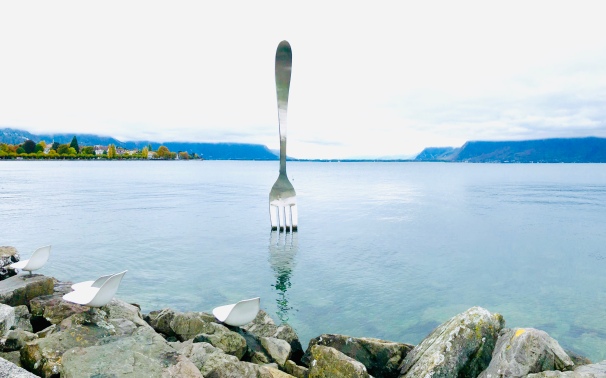 Remember~when there is fork in the water take the lane less swum!