Not sure really where to begin it’s been quite a swimming week!

From indoor pools to outdoor pools from chlorine to salt water from coast to coast. It started on Patriots Day under the bubble at the Wayland Town Pool staring at the black line in lane 8.  In the short hour I could swim before heading to the airport Coach Jen had the perfect workout to knock me out for the long flight to Los Angeles.

A short twelve hours later (maybe not so short) I found myself in the Pacific Ocean in my old stomping grounds-Laguna Beach!  It was for the second swim of the day! The water was a cool 59 degrees and I swam with no black lines from my hotel the Pacific Edge to the base of Las Brisas and back. It was just over a mile round trip and the water temp felt just fine. Cool but very doable. I could have swum longer. It was also a first~a bi-coastal east coast pool swim followed by a west coast open water swim all in the same day! 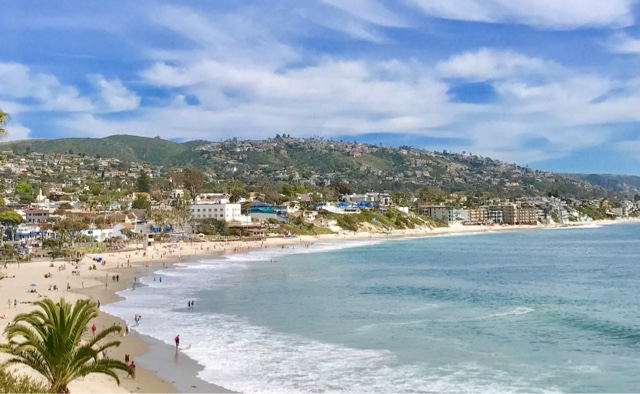 The next morning before having to leave for a business meeting in San Diego I was able to squeeze in three laps on the same course for about 1.5 miles.

Post meeting in San Diego it was back up to Los Angeles for meetings the next day. After a quick pit stop at my hotel in Marina Del Rey it was off to the Bungalows and downtown Los Angeles to take Ryan and a friend to dinner. We went to the hip Ace Hotel had a drink on the roof top bar and then went downstairs for dinner. It was a fun and quick dinner with Ryan as he a lot of homework. Looking forward to seeing him in three weeks for graduation. 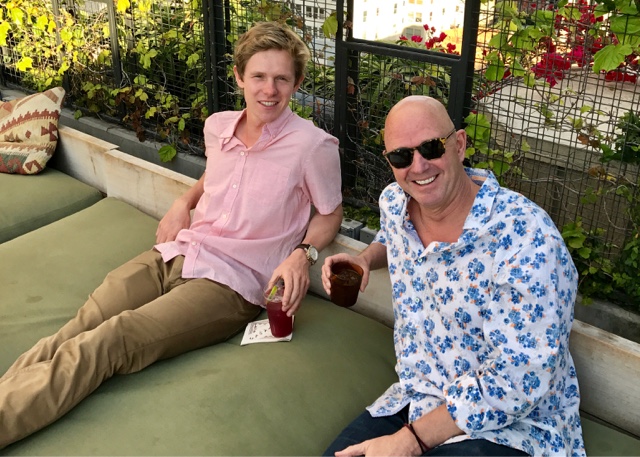 It was early to bed as the next morning had the potential to be another first. The alarm went off at 5:00am. I groaned, rolled over and wrestled with whether or not I should go to swim practice or not. Good prevailed and I rolled out of bed for 5:30am practice with Southern California Aquatic Master. It was as at Loyola Marymount University in Playa Vista and pool #91. Per usual, in Southern California it was a 10 lane outdoor pool and set up long course too boot. It was a 3000m workout that started in the dark and ended at 6:30am with the light of dawn. It had been awhile since swimming long course and it felt good.

Post swim it was time for some quick nourishment on Abbott Kinney. I went to the TOM store where they have a cool back patio grabbed a bite to eat and did some work. 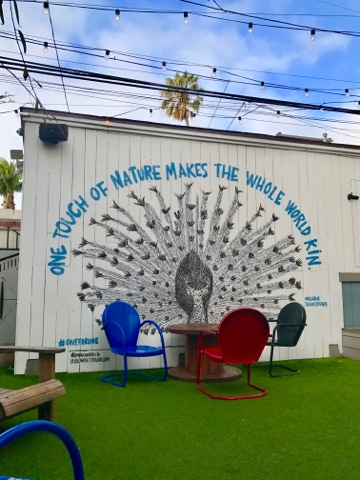 Recharged I was ready for round two~an open water swim.  It was off to Santa Monica and (lifeguard) Tower 26. It was a bit choppy with a fair amount of surfers in the line up. Once I made it past the break it was smooth-ish sailing. It was pretty kelpy in some spots and I got whacked by an unsuspecting wave once. I swam towards the Santa Monica Pier for bit and swam back. My guesstimate is that I swam 2000 yards. A quick check in with the lifeguard confirmed the water temp was 59-60 degrees. Feeling much better about my cold water acclimatization while I need to be in cool water longer than I have been it’s really feeling quite good. A confidence boost, for sure.

A chlorinated pool and the salty Pacific a two-fer before 9:30am~another first!