Normally swimming and golf don’t often collide in my world. Nor would I have ever thought I would blog about them together.   You see, one is an aerobic sport where your heart rate and physicality is challenged and well…the other is a bit more…uhh…sendentary.

Last week I was in Minneapolis for work and to entertain clients at the Ryder Cup.  It was also a great opportunity to get a couple of master practices in at the University of Minnesota aquatic complex. I had been there a couple of times in the past. First with Ryan and Tommy for NCAA’s in 2011 to watch our friend Conor Dwyer then an aspiring Olympian and now an Olympic medalist compete. The second time was in 2013 and pool #12. The new competition pool was closed that time so I swam in the old competition pool a 25 yard tiled pool with character. I remember talking my way into the athletic facility without paying that time too. 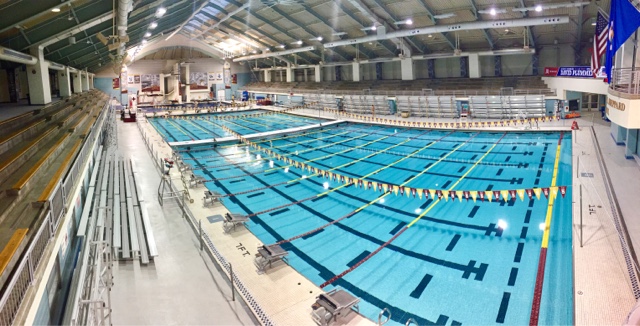 The new aquatic facility the Jean K Freeman Aquatic Complex is a beautiful 50 meter x 25 yard pool with a separate diving well. It was clearly built to host large championship competitions. I swam two mornings with a warm Midwest welcome from Coach Scott of Genisus Masters and my lane mates; Bubba, Jason and Fernando. While the workouts were only 3600 yards they were tough which was good as the rest of the day would be spent eating and drinking at Hazeltine National Golf Course in Chaska, MN for the Ryder Cup.
My friend Zach and I were there to entertain clients we had never met at the practice rounds.  It was a bit of a process getting to the course but once you got there you could tell this was a world-class event. The course setting was gorgeous, with corporate tents and United States and European Union flags flying everywhere. Social media had said Michael Phleps was there the day before so I was on the prowl for a Phleps sighting–this where swimming and golf collide. I was likely more focused on where to find him than I was on the golfers as I had no idea who the golfers were. At the end of the day I finally found him at the Omega watch corporate tent as they are one of his sponsors.  He was there bigger than life…on a billboard swimming fly. My day was complete and had gone full circle! 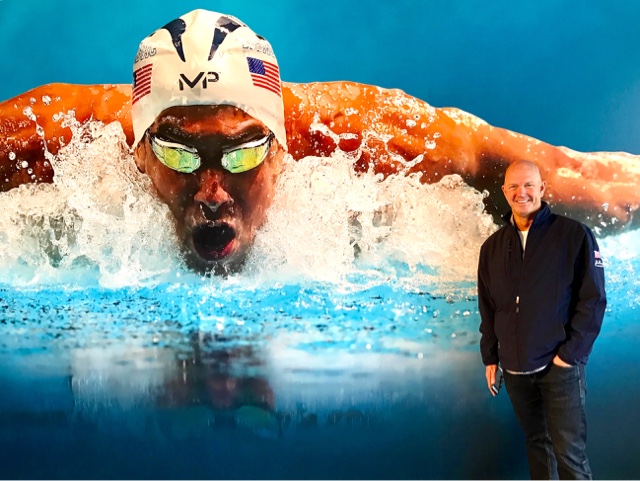 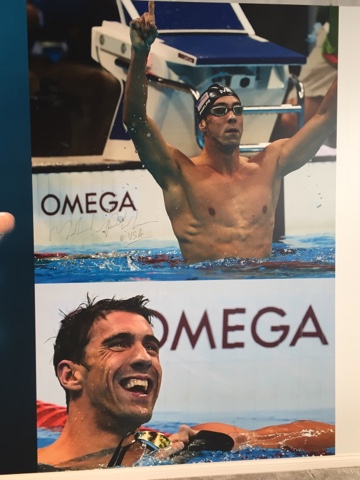 To keep the golf theme intact Zach and I found the actual Ryder Cup on display and had our picture taken with it. It turned out to be a very popular post on Zach’s Facebook feed. Zach doesn’t golf either which made it a bit ironic two non-golfers posing in front of a golf icon. 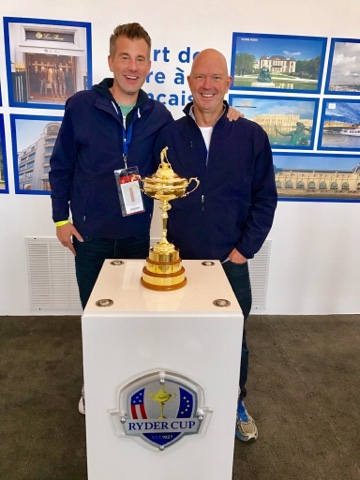 Good company, good food and a new experience made for a memorable trip. Not sure I will go back to Hazeltine ever again but when I go back to Minneapolis I know where to swim!