It was a very long and straight road that led me to pool #76 Rose Bowl Aquatics in Pasadena, California.  By long road, I mean I drove 3,077 miles from Boston to Los Angeles in 46 hours just to get to this Southern California oasis.  After 3.5 days of driving, truck stops, road food and no exercise I was relieved that this beautiful outdoor aquatic facility nestled in the Arroyo Seco next to the Rose Bowl was not a mirage. 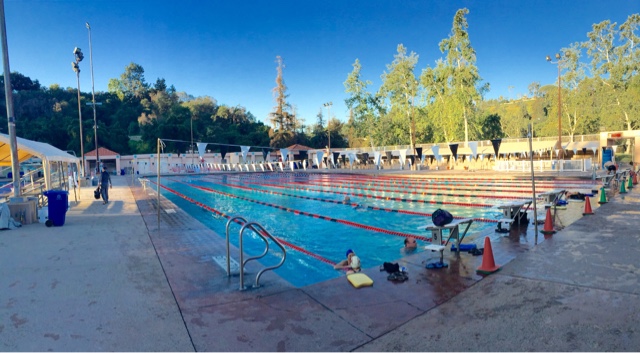 This whole journey was inspired by Ryan’s need for a car in Los Angeles over the summer so he could get to and from his internship.  With a fair amount of rationalization I decided to get myself a new car and pass my Jeep on to Ryan.  The question was how to get it to him. I could have it shipped out there on a truck or I could, well…just drive it to Los Angeles myself.  The answer was easy–drive it myself! Why not? It was something I always wanted to do. Yolo!

Pulling out of the driveway on a Thursday night after dinner was a bit daunting knowing what lay ahead of me. I wanted to get a couple hours under my belt so I drove to Danbury, Connecticut. Friday morning I hit the road at 5:45am and began the trek in earnest. I drove through New York and the hills of western Pennsylvania before having lunch in Ohio and powering through to Terre Haute, Indiana. Logging 887 miles on day one I fell asleep when my head hit the pillow.

Day two started just before 7:00am hoping for a quick dip in the new $10 million aquatic center in the middle of nowhere Terre Haute.  To no avail, as the pool was closed so I began driving. My drive took me through downstate Illinois to St. Louis where I stopped for a photo op in front of the arch. It was then a long drive through Missouri into and practically the width of Oklahoma to Elk City. Stopping at the Blue Whale of Castoosa I experience my first piece of Route 66 kitsch. It was a big day as I drove 779 miles and because it was the first time I had ever been to Oklahoma. 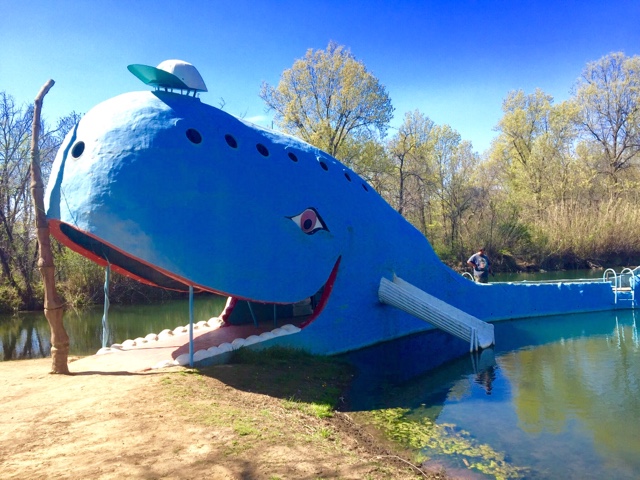 Sunday morning was mentally a bit tough. It was hard to face another 11 plus hour day of driving. My morning ritual of listening to various covers of the song Route 66 for fifteen minutes got me in the right frame of mind for another long day of driving. I am glad it did because it was likely my best day on the road. I drove through Amarillo, Texas and saw Cadillac Ranch basically ten graffiti’ed Cadillacs standing on their ends in the desert. It was another “first state” as I drove through New Mexico and stopped on Route 66 in Tucumcari to see the wall murals on the sides of buildings. The final destination was Flagstaff, Arizona but not before stopping to “stand on the corner” in Winslow and to have dinner at La Posada. I had been there a couple years before with my dad and had a great meal and it was just as good this time. Perhaps it was even better as the food up until that point had been pretty marginal. Post dinner I drove the hour to Flagstaff at night in the desert listening to the Eagles. A perfect way to end a 754 mile day on the road! 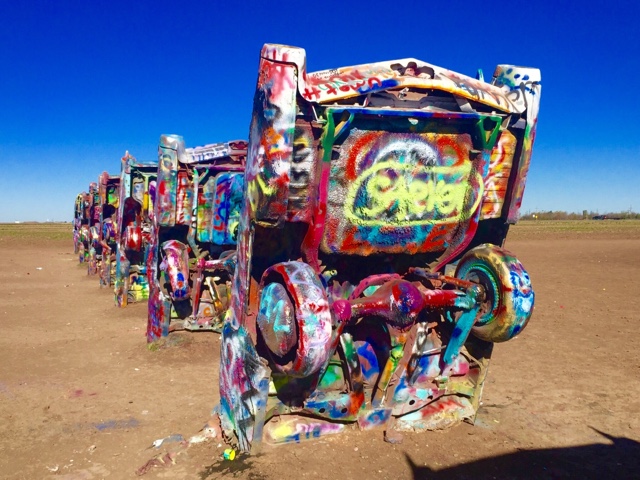 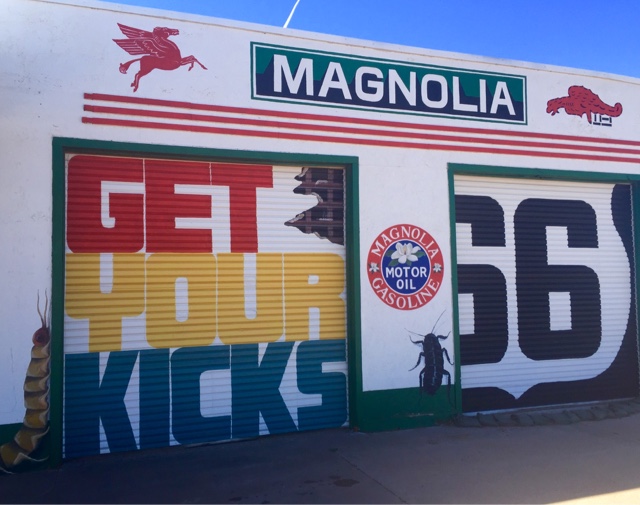 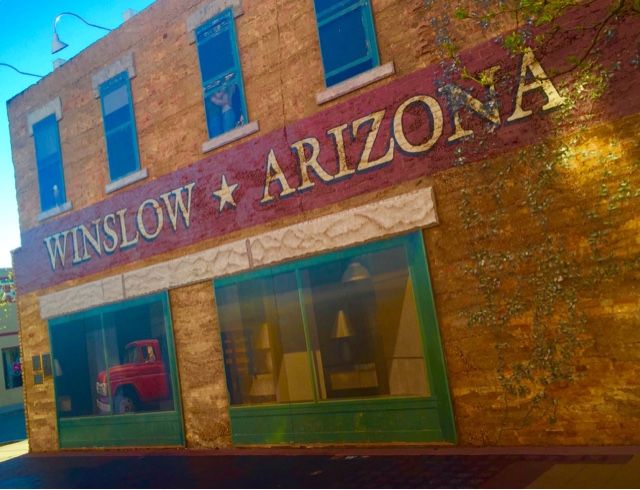 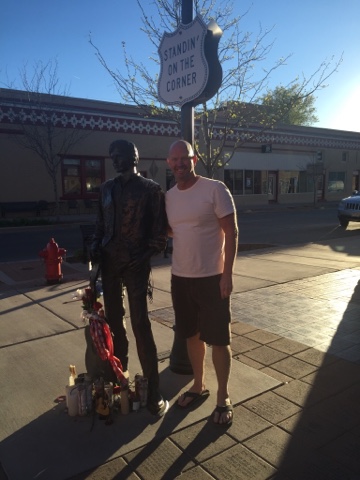 Monday was the home stretch and a short-ish drive of 465 miles from Flagstaff to Los Angeles. I started the morning with another failed swimming attempt at Northern Arizona University at their new aquatic center.  With plans scuttled, I hit the road driving through the beautiful high desert pines and landscape surrounding Flagstaff. The beauty was short lived as I dropped in the barren Mohave from Kingman, Arizona to Bartsow, California.  By early afternoon, I was on the busy LA freeways and a heart beat away from my final destination of University of Southern California and South Central. I did it! Mission accomplished! 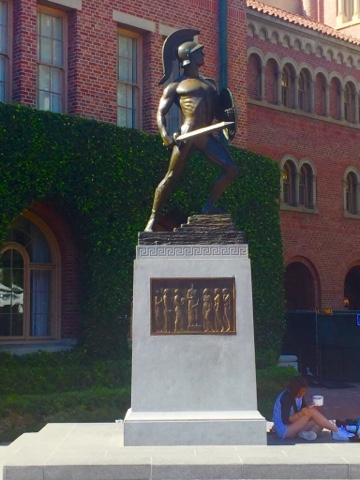 (Tommy Trojan, USC)
Ryan and his friends were blown away when they saw the car and realized that I had driven cross country. Loved seeing the surprise on his face. 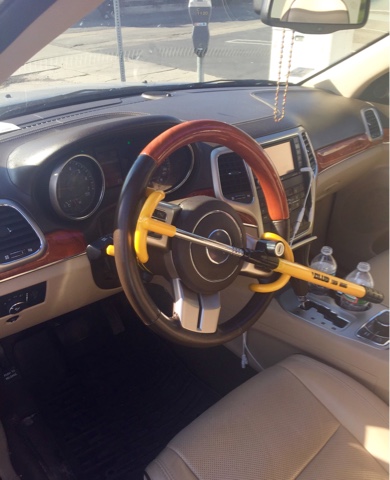 (Car safe in South Central Los Angeles)
It was long and at times a tedious and boring trip but I am so happy I did it. It was an awesome journey! I am actually a bit proud I did it solo. I hit thirteen different states (two of them new to me). I traveled highways and byways, that perhaps I may never see again and got to experience what big beautiful diverse country America is. We are fortunate to live in America!
So as the popular rhythms and blues song Route 66 released in 1946 says:
When you make that California trip
Get your kicks on Route 66!