Well, this was my first pool in Colorado and it surely it didn’t disappoint. How could it? I was in Aspen.

Sean and I came to ski for a few days. More on skiing in a bit. The second morning as Sean was sleeping I discovered the Aspen Recreation Center. It’s a fabulous rec center with two ice rinks, rock climbing wall, fitness center and a nice 25 yard pool with a lazy river and a two story water slide. 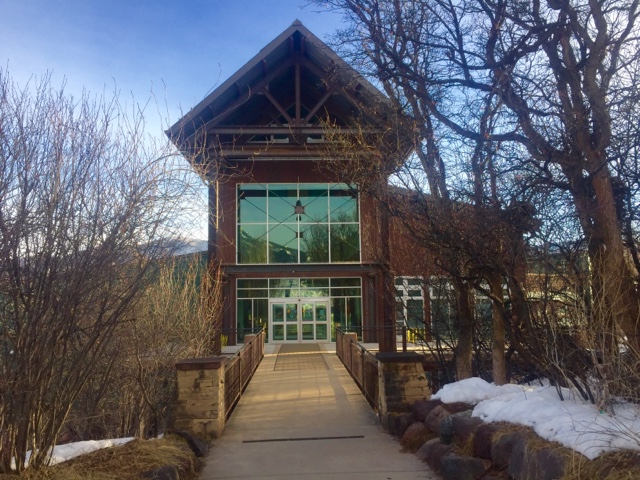 The pool was fairly empty as I was there early. I was struck when I walked in with the beautiful mountain range mural on the wall. The only other place I’ve seen a mural like this was at pool #15 in Whistler B.C. It must be a mountain thing. It ended up being a leisurely 2300 yard swim as I was going so slow. I wanted to blame it on sore ski legs from the day before but I don’t think that was necessarily the case. It was the altitude! I was sucking for air. I now get altitude training. 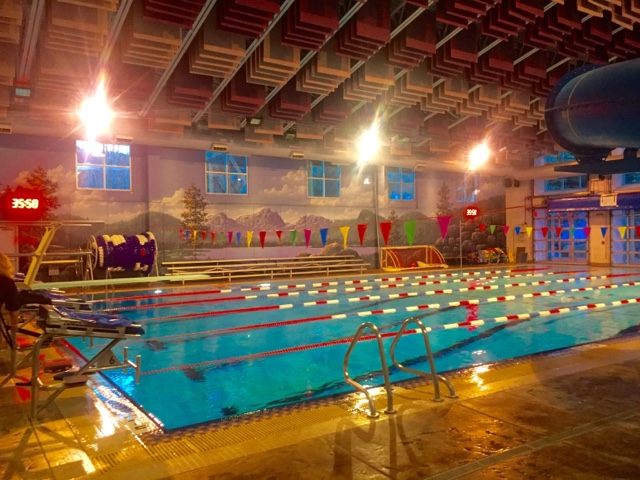 The entire swim I was eyeballing the two story water slide. It looked so fun! I really wanted to go down it. With slight hesitation I went up to the lifeguard and asked her if I could go down it. Why not? It was closed as it was only 7:30am but they opened it up just for me.  It was so fast and a blast! I went down it twice. I am sure they haven’t ever opened the slide that early for a 50 year old speedo clad man. Great way to end a workout! 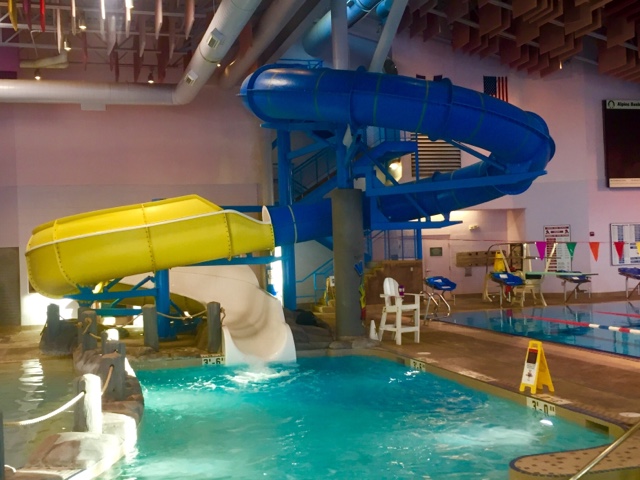 The real workout was about begin on the slopes a couple hours later.
The true focus of this trip was skiing not swimming. Our friend Lara (of pool #33 fame), that always has great recommendations and knows Aspen well gave us one that was the true highlight of the trip. When we were at Aspen Highlands to make sure to take the time to hike up to the summit of Highland Peak and ski down Highland Bowl.
Looking across the valley from Ajax to Highland Peak the day before I knew I was going to be pushing the ski comfort zone. After a couple of warm up runs it was time to hit Highland Bowl.  The chair lift lets you off at 11,675 feet and the you have to hike about 45+ minutes to the summit at 12,392 feet. 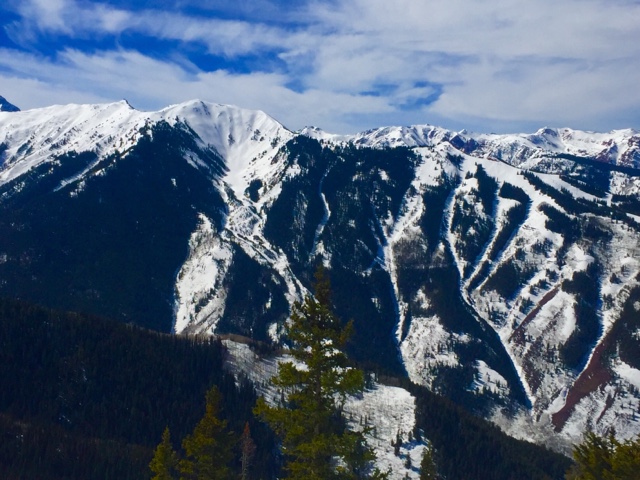 (Looking across from Ajax. Highland Bowl is the bowl center left)

After a short cat ride that took us up about a quarter of the way up we strapped our skis on our back and began the ascent. The hike was fairly steep and quite narrow in some spots with steep drop offs on either side. Frankly, the narrow bits made me quite nervous. The roughly 4,000 feet in elevation change from the pool in the morning to the top and the steep terrain made it a uhhh-solid workout! 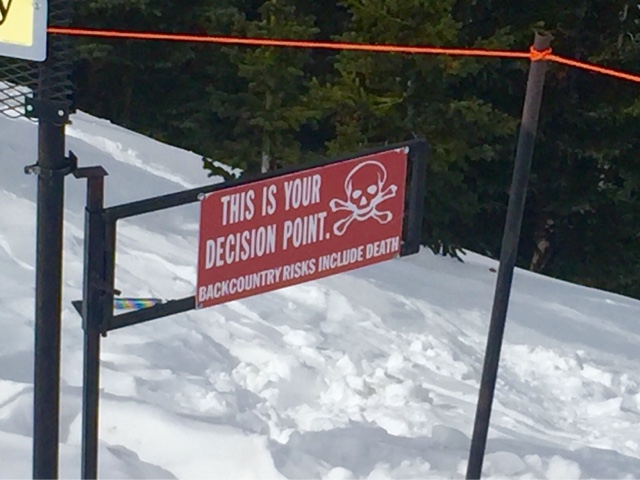 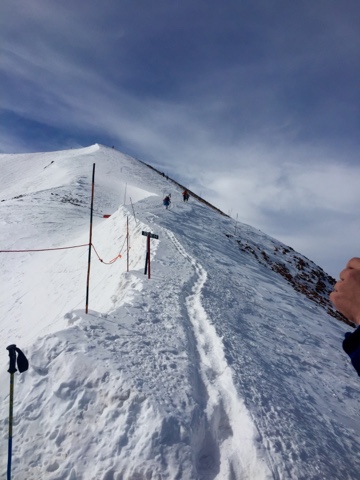 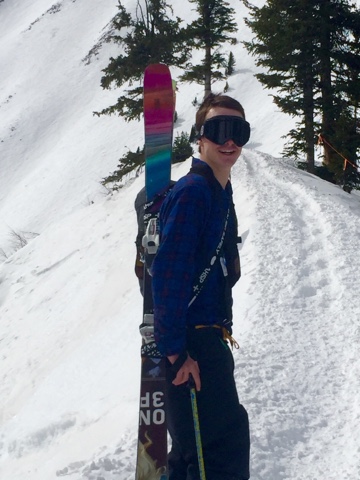 The reward for our efforts were absolutely breathtaking views from the summit. The Maroon Bells, Pyramid Peak and the Rockies laid out before us-you could see for miles. 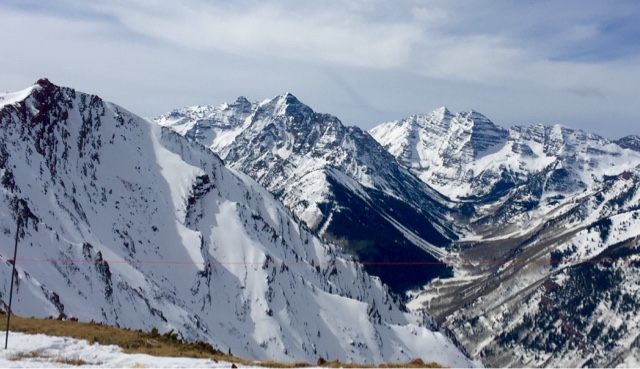 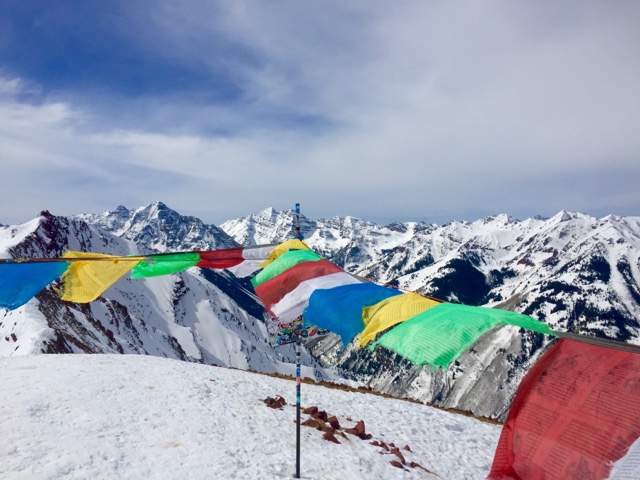 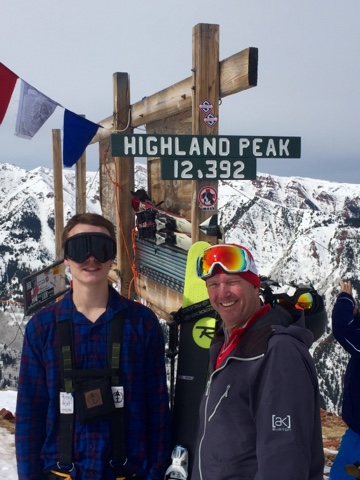 We rested for a bit, took some pics, savored the moment and then got down to business. The run we decided upon was Ozone it was recommended by a ski patrol. Ozone was steep and right down the middle of the face. It was certainly steeper than anything I’ve ever skied. It wasn’t necessarily pretty but I made it down. It wasn’t really too bad. Sean skied it fast and confidently and looked like a pro. 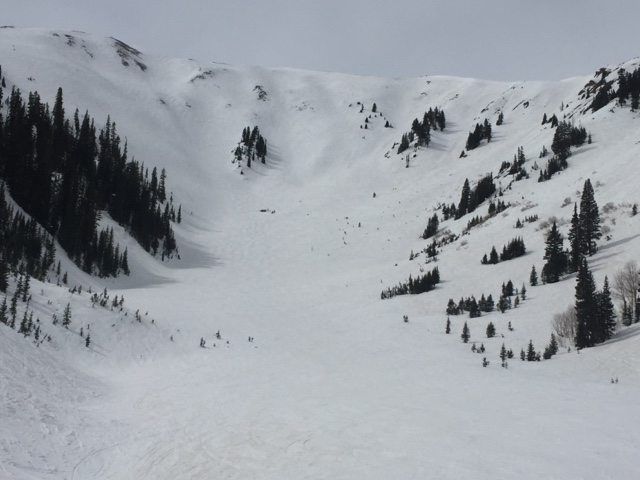 We had worked up quite an appetite during our little adventure so we quickly headed to the mid-mountain lodge for lunch and a bit of champagne to celebrate. 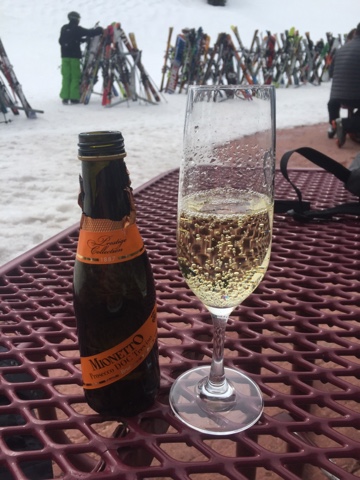 It was the highlight of the trip (thanks Lara) and fun making memories with Sean and seeing him in his element. He will be a great CU Buff! It was also good to push your non-swimming comfort zone and to find a new pool to boot.