This past week I participated in the inaugural Misery Challenge off Tucks Point in Manchester by the Sea, MA.  This was a new and unique event on the North Shore that featured swimming, supping, rowing and kayaking. You could choose your own discipline and distance. Naturally, I chose the 3 mile open water swim to Misery Island. The other disciplines were 4 miles and went around the island.  I drove up to this quintessential New England setting on the coast just north of Boston with my carpooling/swimming friends Rachel and Elaine. 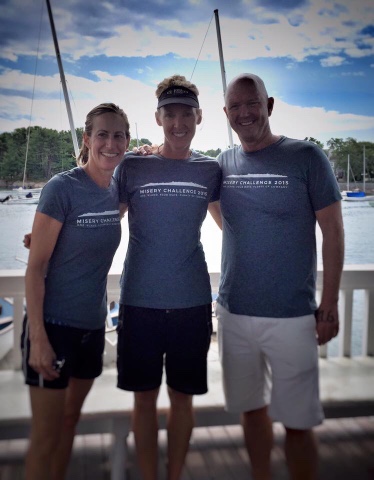 It was an early morning for the swimmers as they wanted to get the swimmers in the water and out so they could start the other races and open up the harbor for the weekend boat traffic.  There were 95 swimmers most of them wearing wetsuits but the few the intrepid proud (me) went sans wetsuits.
There wasn’t a mass start as it was a new event in a narrow harbor so we went off into the water two by two, time trial style.  The water was in the mid-60’s and felt pretty good (funny to say that).  Early on the course there were some twist and turns to get us out of the harbor and away from the channel. Once we got through that it was a straight shot to Misery Island. The water was fairly flat with a few cold patches along the way.  Sighting in the long stretch to the island was a bit of challenge due to the sun and to the lack of sighting buoys. I’m sure next year they will have a couple additional buoys.
I finished in 1:12 and held off a (young) guy I wanted to beat.  There wasn’t any categorization by wetsuit or non-wetsuit which was fine. I was 23rd overall and 4th in my age group.  I would say a good portion of the people ahead of me were wearing wetsuits. My fast friend Eric won it in a fast 58 minutes!
After the swimmers they launched the rest of the water craft. It was a bit of a zoo in the harbor at the start but it sorted itself out quickly. It was a great inaugural event and the organizer should be happy with the turn out. 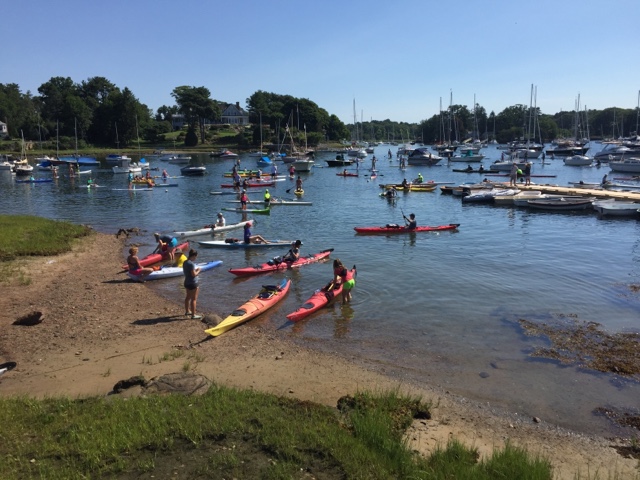 Check out this link https://www.youtube.com/watch?v=ewgfnRv6J2Q to see a drones eye view of the swim.
There was no misery it was only in the name of the event!

The second event this week that many would perceive as misery was my visit to the Weston High School summer swim practice.  I showed up promptly at 6:30am to be greeted by a funny smile from Coach Valz. Clearly, he had something up his sleeve. We swam about 1500 yards and were waiting for the next set when Valz said that had a very special guest coach to lead the next set. Well, that guest coach was none other than Fran, a friend and nationally acclaimed former synchronized swimming coach. Yes-you guessed it we spent the next 1.5 hours synchronized swimming.  I performed miserably but had a great time with the kids sculling, doing drills and the finale as team we did some lifts.  There is a lot to synchro. A great way to shake things up a bit!

The final highlight of my week would never have the word misery associated with it was going to see James Taylor in concert at Fenway Park! It was beautiful night listening to music with Shannon and swimming friends Elaine and Katie. 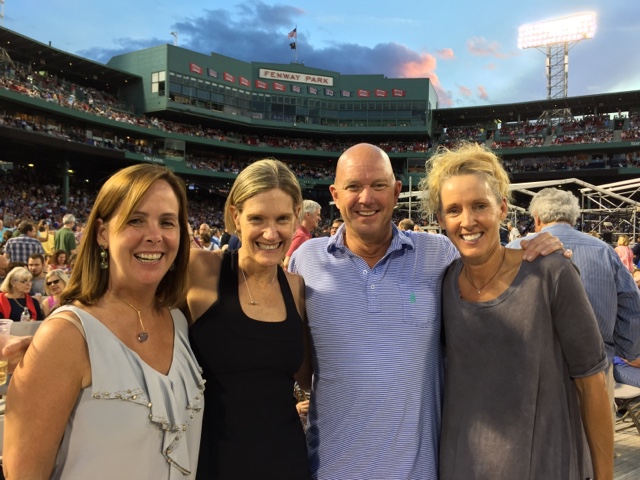 Very little in life is miserable when you are with people you enjoy spending time with!