Such an awesome week!!! I was able to hit three outdoor pools (in three legendary swimming counties) and an open water swim in Southern California and see some dear old friends to boot-all in three days.

#65 Laguna Beach Community Pool:
Went back to the old stomping grounds of Laguna Beach and swam in the high school pool. It’s set up on the hill overlook the Pacific. It’s a fairly busy pool with people coming and going and a $2.00 admission. I did have a lane to myself. The night before I had Mexican food and margaritas with my good old friends Mason and Dean. We laughed and told stories for a long time. A few hours post swim I had lunch (Mexican) with my old friends Mike and Gina and reminisced about starting our careers in Laguna in the mid-80’s.  Laguna Beach is beautiful with such great life long memories! 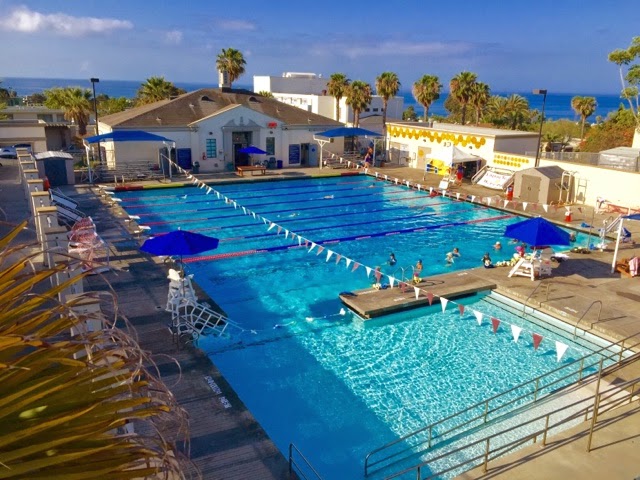 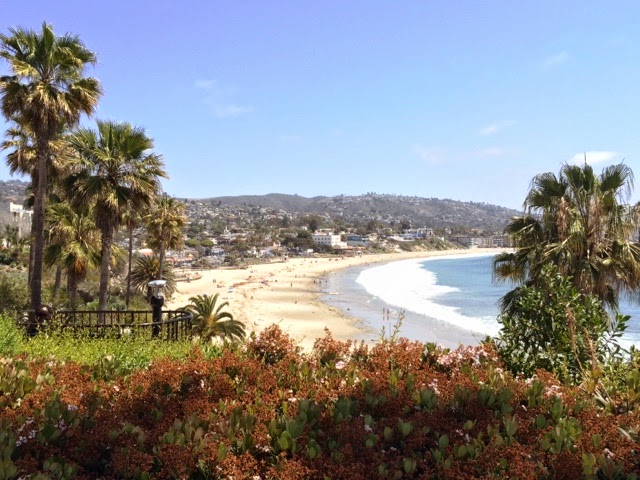 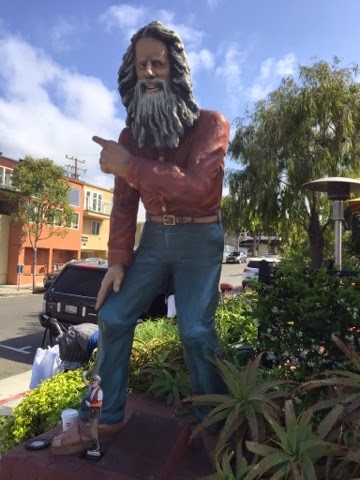 The Laguna Greeter-Eijler Larson
#66 UCLA Park Pool:
After having dinner in Venice at a fantastic  Italian spot with some great work friends my intent was to swim with the Bruin Masters.  I got up in time to hit their second practice. After walking around the campus going from pool to pool (yup there are three pools on campus) looking for the masters team I realized I had read the schedule wrong. With two pools closed I was able to sweet talk my way into the Park Pool for a short 2000 yard swim. It’s a small pool just behind the newly remodeled Kaufman Hall. 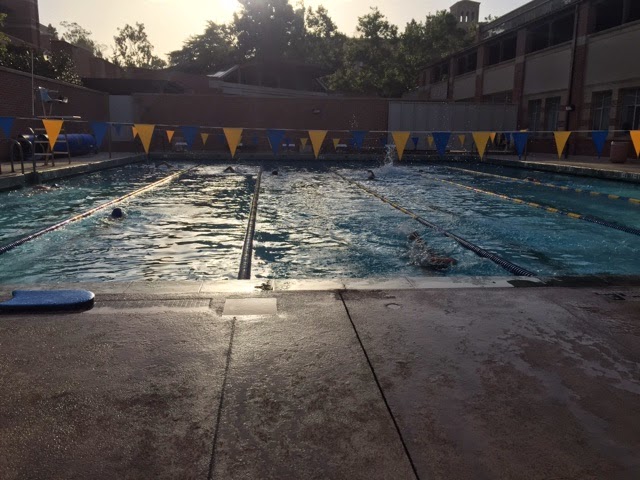 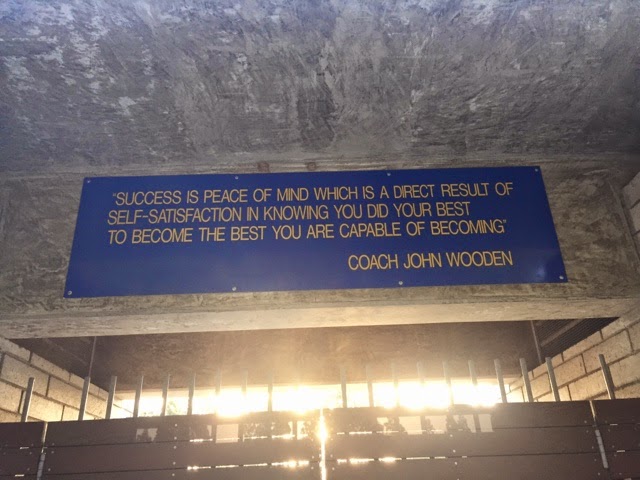 #67 Coogan Aquatic Complex
The final stop of this three county swim adventure was La Jolla. My initial intent was to skip a pool swim and just swim in La Jolla Cove. When I got to the Cove at 7:00am there were two people swimming in and one person heading out. Normally, I would have jumped right in but…there were seals everywhere! On the beach and playing in the water…there were no fewer than 15 seals. I observed it was ok to swim but you just had to work your way around them. Realizing that I was going to be swimming alone I decided not to swim there much to my chagrin and disappointment–basically I chickened out!
I then headed to La Jolla High School and the Coogan Aquatic Complex. Due to my cove detour I missed the Wind n’ Sea masters workout.  I hear it’s a good group and hope to swim with them someday. I swam on my own during public lap swimming in the 25ydx50m outdoor pool.  A really nice pool for a high school. 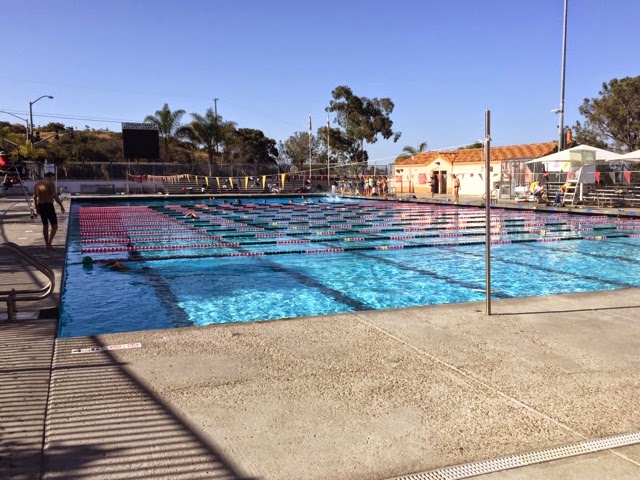 On my way back to the hotel I was drawn back to the Cove realizing that it would put me in a quandary again-to swim or not?!  The seal population hadn’t changed a bit but there were more swimmers coming and going. When I realized that many of them were 20+ years older than me I knew what I needed to do. I put back on my speedo!!! I made my way through the seals on the beach and stared at the ocean trying to figure out dodge a couple of seals to get passed the break.  Finally, I decided just to follow three older men into the water. I swam with them to the first buoy and realized timing wise I needed to swim back.  I swam pretty quickly back through the sea grass and kelp with all sorts of crazy thoughts racing through my head. I’ll let the reader decide what I may have been thinking… I swam a half mile. The water was 61degrees not to bad and I got acclimated quickly (maybe it was the adrenaline). Standing on the bluff looking at the cove and the swimmers a couple of things went through my head; I wish I would have swam longer with the old timers and most importantly I could look myself in the mirror knowing I didn’t chicken out!!!! 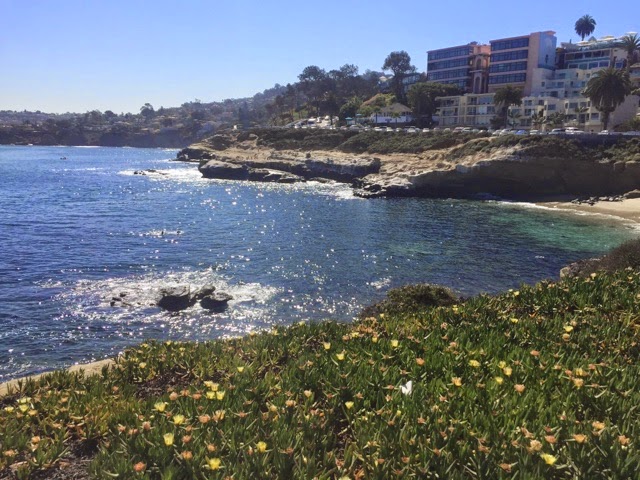 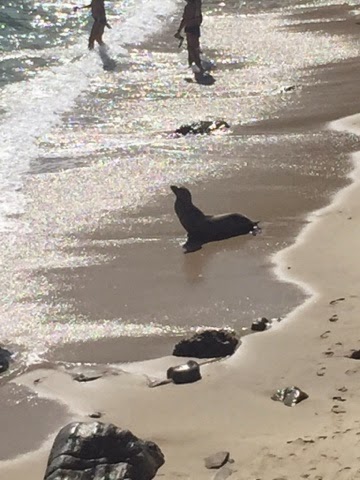 Such a great week! Truly a highlight so far in 2015 seeing lifelong friends in Southern California and getting a few swims in along the way.
Off to Seattle for a couple of days to meet up with the family and then to Yosemite for spring break.