For my readers of a certain age, whose formative musical era, like mine was the 1980’s you are no doubt familiar with the 80’s band Missing Persons.  My favorite song of theirs was Walking in LA.

I have done a lot of Swimming in LA. In fact I have swum in 7 pools in Los Angeles (two@USC, two@UCLA, Loyola Marymont University, Santa Monica Swim Center, Culver City Plunge).  This visit to Southern California I was going to test myself and do some Walking in LA before Swimming in LA.

On my bucket list for quite some time has been to walk from downtown Los Angeles to the Pacific Ocean via Sunset Boulevard.  I thought it would be fun to get a more intimate  view of the different neighborhoods by going for a long walk~26 miles!  I would also prove Missing Persons wrong that nobody walks in LA.

I got up early and uber’ed downtown to the intersection of North Alameda Blvd and Cesar Chavez Blvd. Sunset Blvd dead ends into Cesar Chavez so I thought it would be the best starting point.  I laced up my shoes and started walking at 6:40am. On my left was Olvera Street and a short walk up the road on the right I would pass Chinatown.

It was pretty quiet on the streets that early in the morning so I was certainly going to watch the city wake up as the day wore on.  Passing through the funky Eastside neighborhoods of Echo Park, Silver Lake and Los Feliz I was feeling hipster even though the hipsters wouldn’t be rolling out of their beds for a couple more hours.

I  walked through Little Armenia and then across the Hollywood Freeway into Hollywood. When I got to Sunset & Vine I knew I had to take a quick detour north to Hollywood & Vine to see the Hollywood Walk of Fame and the iconic Capitol Records building.  I took a couple touristy pics and I hoofed it back to Sunset. 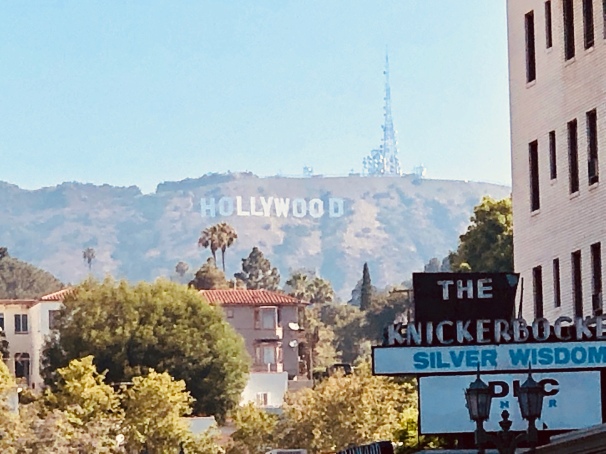 When I looked right and saw the Hollywood sign I played Miley Cyrus’s song Party In The USA. Yes~it was all so crazy! 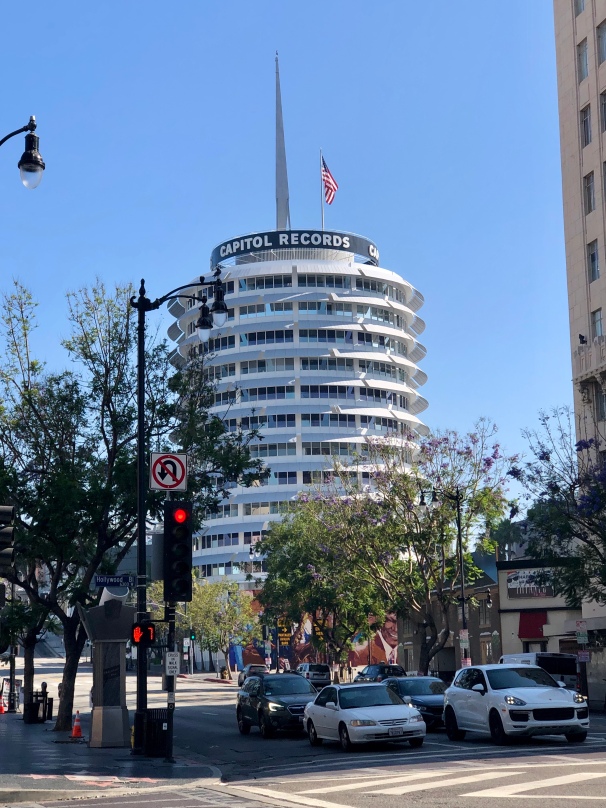 My nephew Connor stopped by and we chatted for a bit with glazed donuts across the street from the historic Chateau Marmont of Hollywood stars intrigue and fame.

Shannon and Ryan uber’ed up to join in the fun. We talked briefly about the upcoming family wedding in Portland and then it was back to business. There were now three up us (Shannon, Ryan and I) on this journey~walking in LA.

We hit the Sunset Strip and WeHo checking out the shops, the billboards and the big clubs; the Viper Room, Whisky A Go Go and the Roxy. For those of you that don’t know “the business” (you know-show business) WeHo is short for West Hollywood.

We were about 5 hours into the journey when we reached Beverly Hills. I promptly played Weezer’s song Beverly Hills. Ryan busted a move and Shannon started snapchatting away. 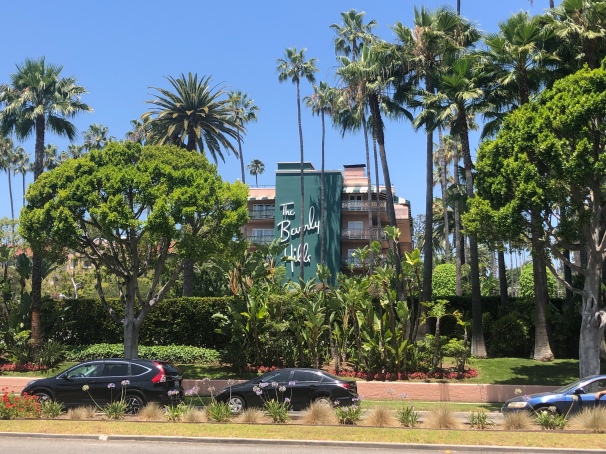 The boulevard was more windy and the homes were certainly more grand than where I started my morning as we entered Bel Air.  Again, musical inspiration hit and I played DJ Jazzy Jeff’s song Fresh Prince of Bel Air.  Nobody (buts us) walks in Bel Air…it may be because there were no real sidewalks or it may be that everyone really enjoys driving Bentley’s, Rolls Royce’s and Aston Martin’s. Its crazy!

We took a break went onto the campus of the “other” university in Los Angeles (UCLA) as my feet were barking hard and I was starved.  People in Beverly Hills and Bel Air I guess don’t walk or eat either as there were no coffees shops or stores on our route.  Shannon left us at UCLA to go check into our Venice Airbnb.  It was obvious that this was going to be a two day trek as in a few hours we needed to be at another 80’s music themed event.  As Sunset climbed up to the 405 Freeway, Ryan and I committed that we would at least walk pretty deep into Brentwood.

After 17.4 miles and 8.5 hours of walking I tapped out! We uber’ed back to our house for a quick rest.

Somewhere in the middle of our walk we decided a concert at the Hollywood Bowl would be a fun evening event. So we spontaneously bought tickets. Wouldn’t you know a 80’s music icon would be playing at the Bowl alongside the LA Philharmonic~Cyndi Lauper! Can you believe it? 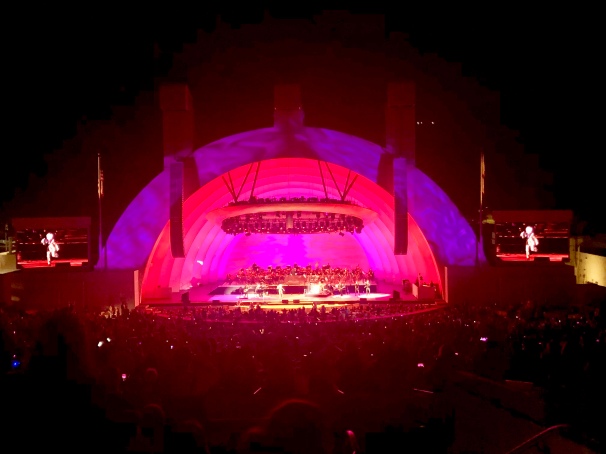 The concert was great, memorable and the weather was gorgeous. Cyndi Lauper still “had it” a fabulous entertainer.

I would like to say I bounded out of bed the next day but that was not the case. I felt a bit slow and creaky.  By mid morning,  I made my way back to where we ended our trek the prior afternoon. There was just over 6 miles left in the journey.

Passing the intersection of Rockingham and Sunset in Brentwood where the notorious criminal O.J. Simpson once lived I entered into Pacific Palisades.

Not sure I had ever been to the Palisades before but, wow! There was the Rivera Country Club area, Will Rogers State Park and eventually the Palisades Village.  My feet were barking but I could feel the cool marine air and I knew I was getting close. I got to an overlook just above the the Self Realization Lake Shrine (how very SoCal) and could see the promised land aka ocean. 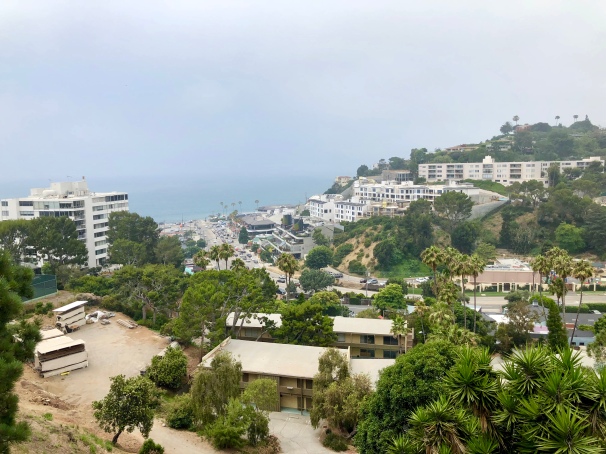 Not sure I sprinted but I think there was a bit more of a giddy-up in my step as I made my way to finish at the intersection of Sunset Boulevard & Pacific Coast Highway.  I did it! Today’s walk was 6.5 miles and almost 3 hours.

Now it was time to Swim in LA!!!  Jumping in the Pacific in front of Gladstones for a dip and short swim felt awesome! 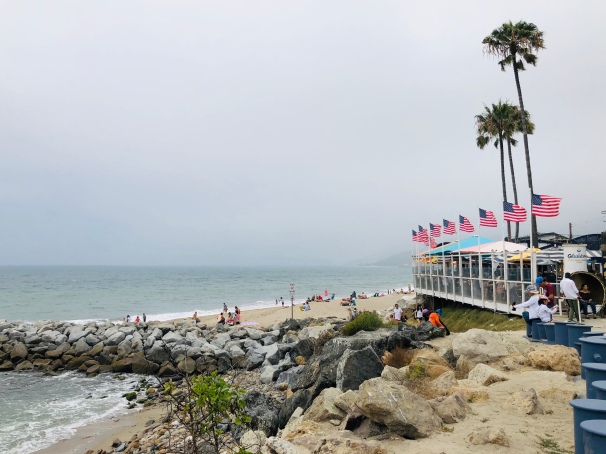 Interesting to note that this walk was shorter than my swim around Manhattan a couple weeks before but it took be longer to walk that distance.  This bucket list experience was harder than expected. Such a fun way to experience the City of Angels neighborhood by neighborhood. To celebrate this achievement Ryan and I decided that a sunset drumming circle in Venice and another dip in the Pacific was appropriate. 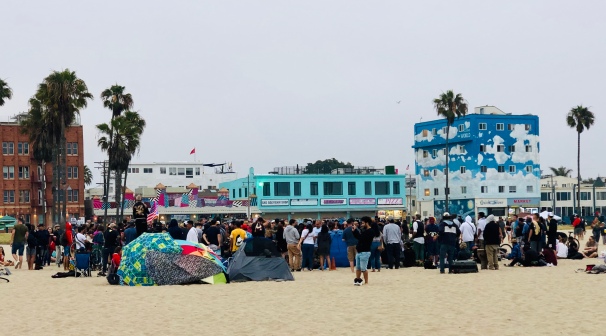 2 comments on “Walking in LA…”