Skip to content
This weeks swims reminded me of the quote by Ralph Waldo Emerson.
Live in the sunshine, swim the sea and drink the wild air.

Twice this week I have had a chance to swim the sea. That doesn’t happen to me often unless I’m on vacation or in some tropical locale. With the Anacapa Santa Barbara Channel swim about six weeks away swimming in water cooler than the pool at MIT is key.

The first swim was at First Beach in Newport, Rhode Island. I was there for an overnight business trip so I got up early and found the beach around sunrise. There were two cars in the parking lot with a couple of people watching the sunrise and drinking coffee. I think they may have been a bit surprised when I changed into my speedo and with my buoy in tow walked directly into the rolling waves and started swimming. The tide was out so I had to swim out a fair distance out so I could actually swim. It was a bit choppy and towards the one end of the beach it was a mess of red algae or seaweed. I lasted for about 25 minutes when decided I that if I really wanted to swim longer I was going to have to swim out farther to get out of the chop. I realized that may not be a good idea as I was the only one out there. The water temp was balmy 67 degrees. 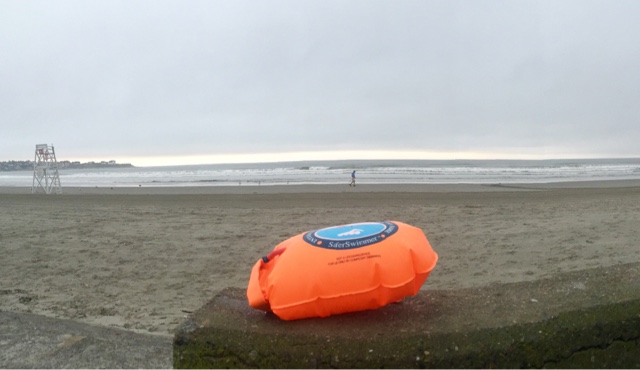 The second was today, Saturday where I took a 45 minute drive out to Nahant just north of Logan airport a bit.  I was to meet a small group of the Nahant Knuckleheads for a swim. I got there just before 7:30am start time and when nobody showed I after a few minutes I went out on my own. It’s a big long white sand beach and at that hour there were quite a few people out walking or jogging. The tide was out and I headed north as far as I could without getting in the way of a kite boarder and then I turned around and went the other direction towards Nahant until I found more kite boarders. The wind had definitely picked up and it was obvious that more kite boarders would be on their way. As I was heading back to shore I saw the group I had hoped to swim with just heading out.  I figured I swam just under two miles and again the water was 67 degrees. Ideally, it would have been better from a acclimatization point of view  if it was a few degrees cooler. Maybe next weekend for Sharkfest in Boston Harbor. 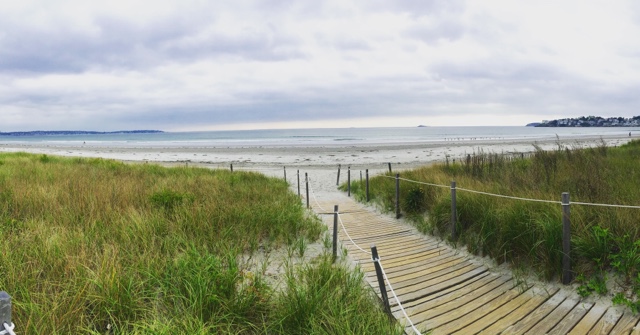 It was nice to swim the sea a couple times this week.
Driving past the Weston Town Green I realized it was the 15th anniversary of the September 11th attacks. Every year the town remembers that day in 2001 by placing flags on the town green in the shape of a flag. It’s always a dramatic tribute. While the grass was brown due to our drought is was still beautiful and moving nonetheless. 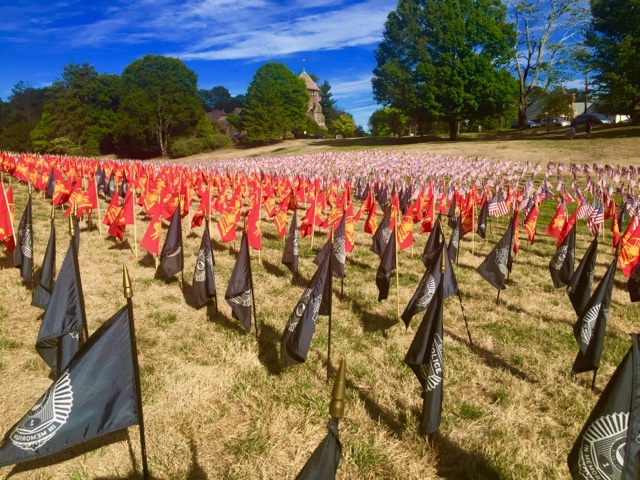