Skip to content
The week of Thanksgiving always brings a special treat to a handful of us at MIT Masters the Tough Turkey Throw Down (newly coined name by Coach Bill). Urban legend has it that I came up with this set-I beg to differ. I prefer to believe that it was a collective effort between a couple of my primary partners in crime; Hubbard and Ian. This set has been part of our pre-Thankgiving festivities for the last 4-5 years.
So here is the main set after a light warm up: 200 fly, 400IM,1650 free all in one stop now-stop swim!
The most daunting part of the set is the anticipation of the first 300 of fly. After the fly there is a bit of a reprieve with back and breast followed by lots of free. Counting laps is the hardest part. While clearly a challenging set it is rarely as bad or as hard as we make it out to be.
Coach Bill set aside three lanes for this event as the number of participants increased along with the sense of bravado and hence the set took an interesting twist this year.
It all started with an early morning stop to Dunkin Donuts… 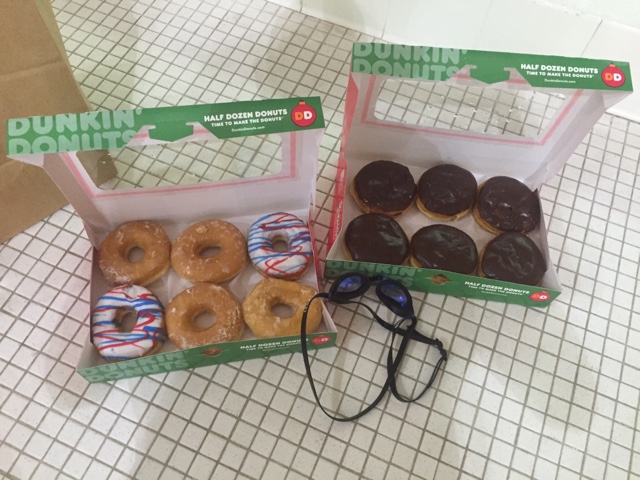 Somehow over a series of emails it was decided that post main set we would slam a Boston creme filled donut and swim a 50 fly sprint for time from the blocks. At the 25 yard turn is when the Boston creme began to kick in…ugh. There was a clear sense of accomplishment by all post time trial.
Not sure whose wise ass idea it was (read Joe) for the warm down but it was a good one…
400 reverse IM, 200 fly followed by a 100 fly (with short breaks in between this time).
Let the season of Thanks begin! I’m thankful for crazy swimming friends.
Gobble Gobble 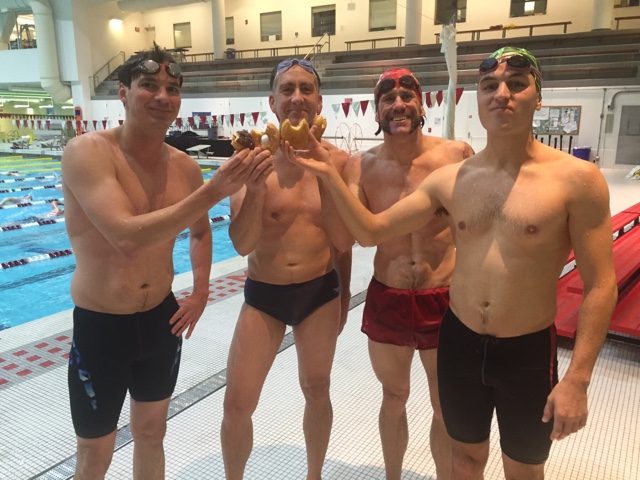