The marquee event of this grand adventure turned out to be be even better than expected!!!

After a big night at Galatasaray Island we checked into our Ottoman Sultan like hotel at the Ciragan Kempinski Palace Hotel. After a brief respite in our luxurious new surroundings we went to athlete accreditation at the park nearby the hotel.
Like many big events it had all the signage and excitement of athletes milling about. What began to distinguish this from others was the swag bag. In addition to the Evil Eye designed 25th anniversary race shirt we got a very cool gym bag, a new Arena swim suit, foodstuffs and post race a beach towel.
We hung around for a bit and then we took the boat cruise to do a race course inspection with some type of communication identifying key sighting landmarks. With the chatter of Turkish, Russian, Greek, Bulgarian, Italian, German and Spanish it was quite clear there weren’t many Americans signed up for the race. After the cruise we got pizza from none other than Upper Crust Pizza of Boston origin. Oddly enough the owner of Upper Crust Istanbul had lived in Boston and was friends of the owner and started his own outpost. 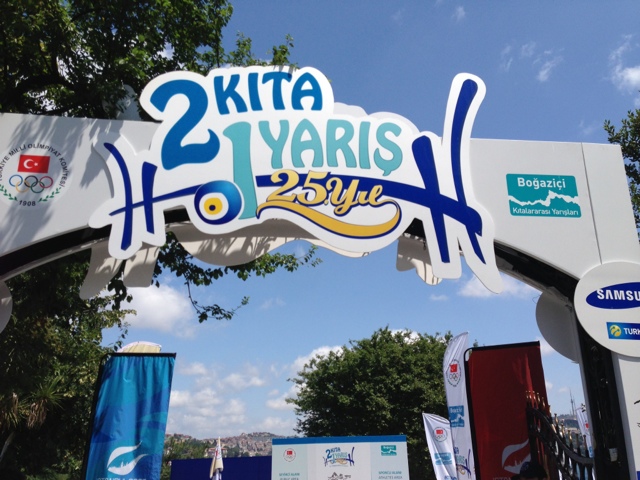 The entry into the Athletes Village 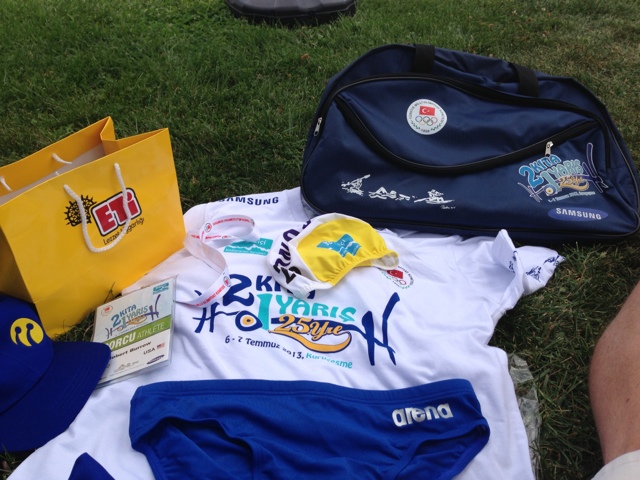 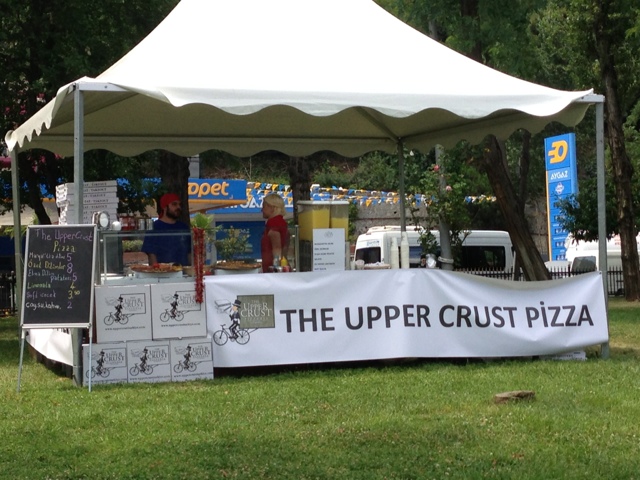 The Istanbul out post of our Boston pizza chain.
After and early dinner in Ortokoy I tried to get an early nights sleep. Didn’t workout so well with nerves and a huge wedding bash at the hotel keeping me up.
Got up around 6:15am and then went to the hotel breakfast buffet. Nibbled a little bit and then caught a taxi to the start. On the taxi drive we say somebody running and it ended up being my friend Bruce Mendelsohn from MIT. He joined at the start before leaving to fly home. 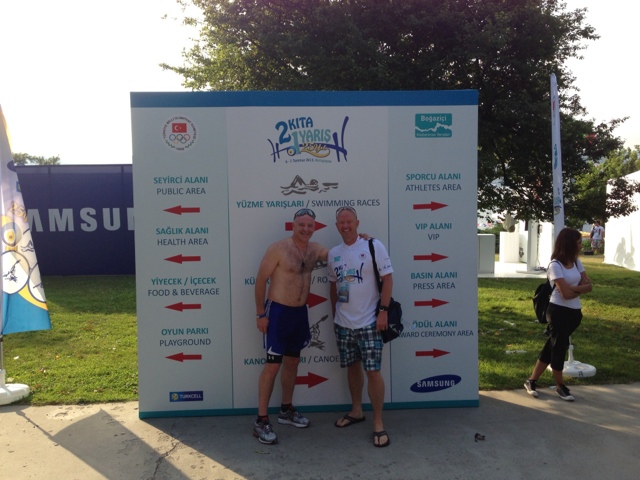 The park was teaming with people. Many more people than the day before and again it was a variety of languages from around the world. Spencer and I just hung out rested and watched the activity. I don’t think he had seen so many people in speedos in his entire life. 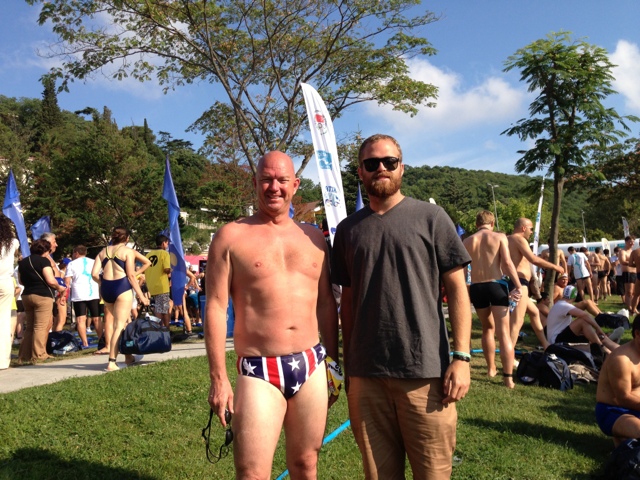 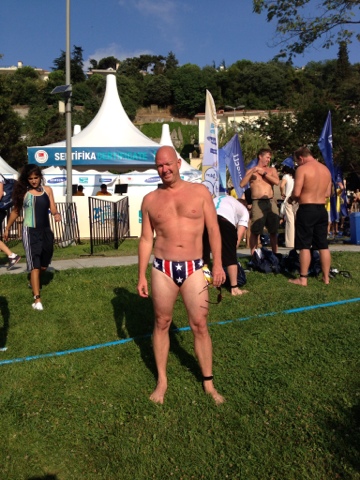 Eventually we got on the two boats that were to take us up the Strait to the small village of Kanilica on the Asian side. On the two boats people began to chant something in Turkish. I thought it was something about rival football teams but it was a chant used in the Taksim protests-something to the effect of Everywhere is Taksim, everywhere is resistance. It seemed that very slowly that the boat made its way up river. I didn’t speak with many people as nobody around me spoke English. The ferry finally docked and we disembarked with the disabled athletes first and then the able bodied athletes. In the short 10-15 minutes before the start there was a lot to absorb; people cheering from the shore, camera booms, camera drones flying overhead taking pics, zodiacs in the water and at least two helicopters flying overhead.
The gun finally went off and I jumped in the water with the throngs. I was expecting the water to be cool but it felt great. The first target was the middle of the Sultanmehmet Bridge followed by the Fortress of Rumeli. While was focused on swimming I did try to enjoy the surrounding with a couple of strokes of backstroke under the bridge and breaststroke by the Fort. 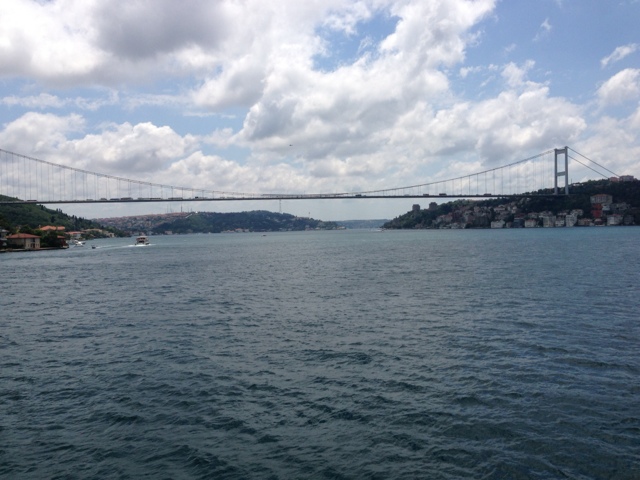 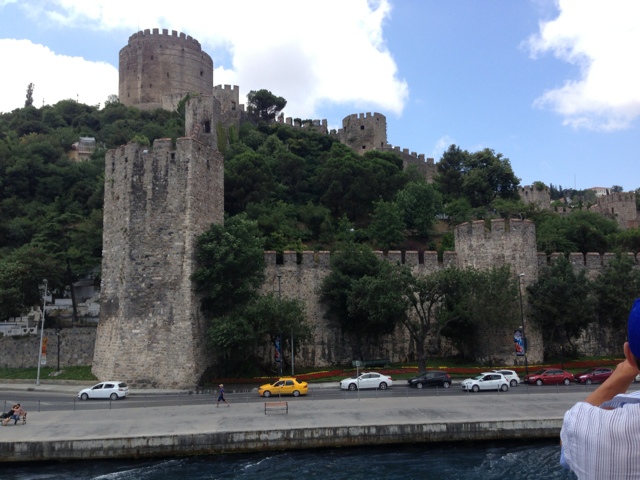 There weren’t to many people nearby me, I could definitely see them but they weren’t close. I felt good in the water and I clearly the current was fast. The next sighting mark was some electrical cables crossing above the river and then the middle Bosphorus Bridge. See below-I was in the middle.

The organizers said (from what I could piece together) the best course was to really stay in the middle and and begin to cut in around Galatasaray Island and I did just that. From the island it was probably under a 1000m dash to the finishing barge.

In keeping with tradition towards the end I did a few strokes fly. It was crazy getting out of the water with people cheering everywhere. I got a hearty handshake and slap on the back from a guy that finished close to me. They gave me a towel and some water and I went to find Spencer. In the spectator area there we jumbotrons that showed times and coverage of the race with people coming in. When I caught up with Spencer he said he saw me finish on the jumbotron and that I was one of the earlier finishers. 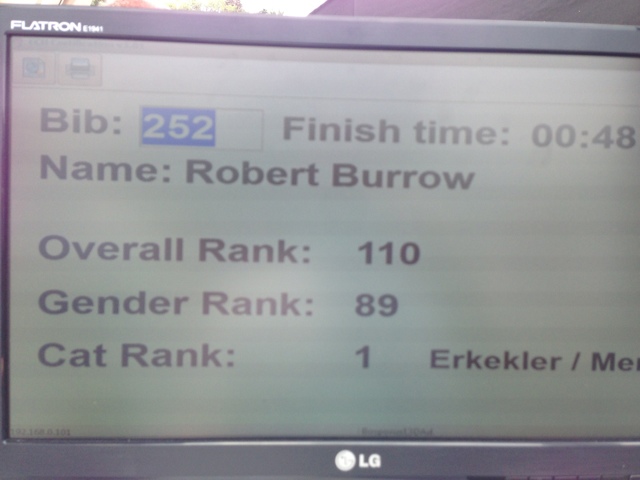 Out of 1532 swimmers that wasn’t so bad and it wasn’t what I was expecting for a 6500m open water swim.
The awards ceremony was a big deal with the announcer speaking in multiple languages and people coming to the podium. I am not so sure I can remember being in that elaborate of a ceremony. 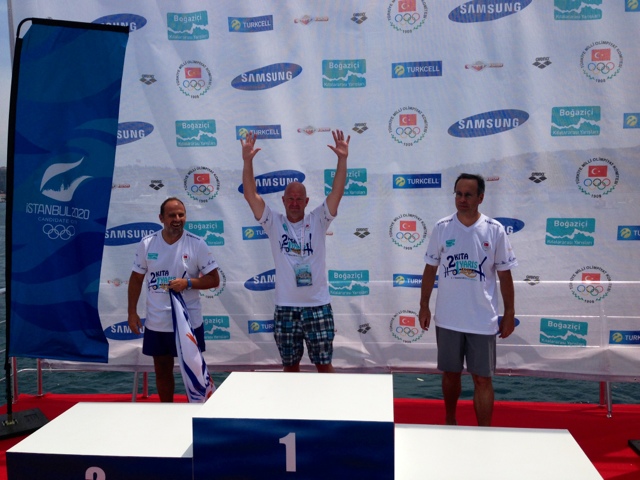 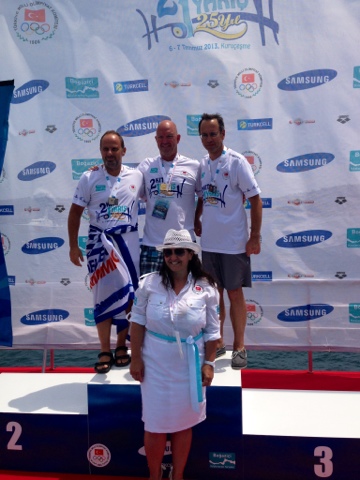 It was a great and memorable day for this 50 year old (I like being at the bottom of the age group)!!! 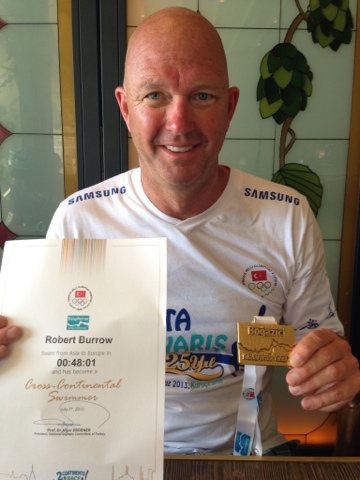