Wow-what an amazing experience! There is so much to share. Not sure where to begin…so I will start with highlights from each day and will go into  detail about the Channel crossing. Readers beware this blog may be longer than normal.

On August 29, it was an easy flight to London Heathrow from Boston. I was met by our good friends the Powell’s from Amersham. It was a short drive to their home where I was fed a proper English breakfast to fuel me for the swim. After a good visit with them I made my way to Dover on the southern coast. The Best Western Spa & Marina Hotel was a short walk from the train station. When I got to the waterfront I saw Rip, Suzie, Tim and our Coach Chloe drying off from a short swim. After checking in to hotel it was a quick turnaround to dinner at a local Italian restaurant. We talked about the days ahead and Chloe shared English Channel lore with us. Red wine, a full,stomach and exhaustion made for a great nights sleep.

(Dover Harbor looking towards France from the Dover Castle)

Saturday morning, we had a brief team meeting met the Water Buffalos (the other SAA relay, recent Princeton grads and classmates) and then we went for a training swim in Dover Harbor. The water felt fine at about 17c. It’s a big expansive harbor that was fun to swim in. By the time we got out of the water we saw quite a few people training for Channel crossings. The Reeves, Tim and I then set out for lunch and to explore Dover Castle. The highlight of that afternoon was certainly the commotion we created when the three of us got our toenails painted red, white and blue at a local salon. That evening it was a SAA group dinner where we hooked up with Kay and our other two relay members Alexa and Trevor. 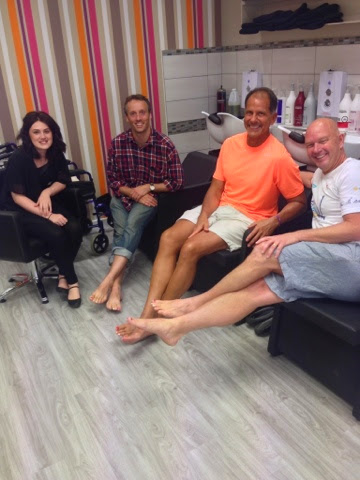 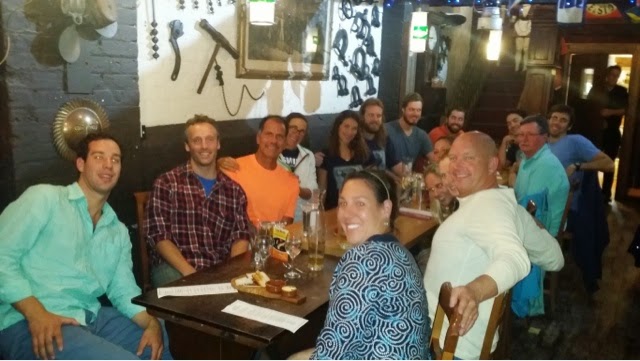 (Team dinner @ Cullen’s)
Things became a bit more real on Sunday morning at the morning meeting when Chloe confirmed our start time of 2:00am BST on 9/1.  There was a brief photo shoot for both teams down by and in the water. The rest of the day was spent buying provisions (food and champagne) at the supermarket for the boat and resting. At some point during that day it was evident that we were going to make this a race with the Water Buffalo’s. A challenge was thrown down by our worthy competitors to swim the first three legs of the relay sans speedo! We readily accepted-why not? Skinny dipping in the English Channel! We had an early Buoys and Girl team dinner and tried to get some shut eye before our midnight wake up call. 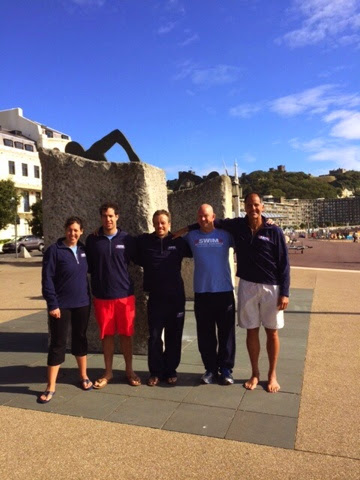 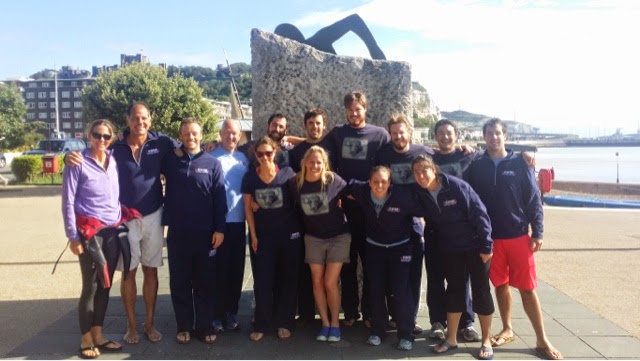 At 12:30am Monday morning, both teams met in the lobby and we quietly made our way to the marina to meet Captain Reg Brickell and his crew aboard the Viking Princess. Captain Reg, a salty local fisherman (rumored to have pirate blood), learned to pilot Channel swimmers from his father many years ago. The Viking Princess was very much a down and dirty fishing trawler. We loaded up the boat and we were on our way with about five other boats to Samphire Hoe Beach to the start. It got very quiet amongst the group as it was dark, perhaps a bit chilly, and the boat was listing to and fro in the waves. In about 20 minutes they lowered the zodiac about 100m from shore, Rip got in and was  escorted to shore for the official start. At 2:06am the air horn went off and the two bare ass SAA teams ran into the English Channel. After months of thinking about it we were finally swimming across the English Channel. 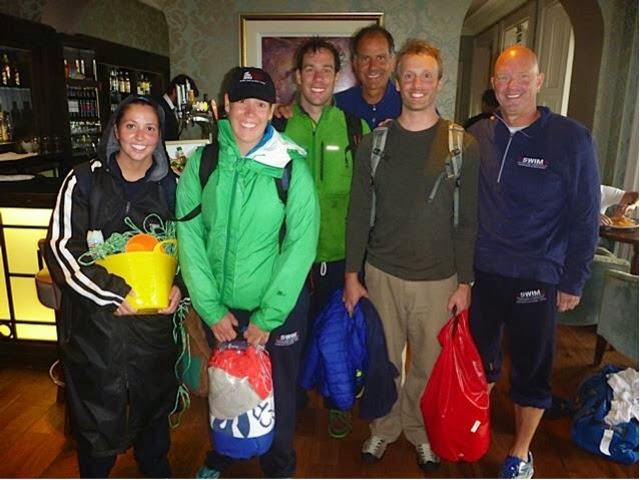 Rip looked strong as he caught up to the boat and continued to hold his own against a very strong swimmer in the other SAA team about 200 meters away from us. The Viking Princess had flood lights that lit the waters off the starboard side of the boat. We were suppose to swim about three meters away from the boat. If Rip swam to far from the boat his white butt served as a beacon!
Shortly before 3:00am I began to prepare for my leg. When all you have to wear is a cap and goggles  the preparation doesn’t take long. I must admit I had a bit of trepidation as Rip swam towards the stern of the boat and I jumped naked into the cold and dark English Channel. After a quick yelp I put my face in the water and I was on my way.  It was cool to be swimming in the middle of the English Channel au naturel at night. Not once, that I remember did I think about scary things that swim in the sea.  What I did find a bit disconcerting was how close to the boat I was at times. The gang on the boat was responsible for telling the swimmers how much longer they had to swim. I asked for a heads up after 30 minutes and then at 45 minutes. The last 15 minutes seemed to go on and on and on. Finally, I got the the sign it was time and I made my way to the back of the boat. I remember seeing Tim and saying “go” and he dove in behind me. Me being me I like to think that I gave the other relay team a run for their money and moved us up a bit.
Tim is easy going and his stroke is just the same. As the last sans speedo swimmer he looked so relaxed and smooth in the rough waters. Despite this seemingly even pace Tim made a huge leap on our competition. In looking around the darkness it appeared that we even pulled ahead of some of the other boats/swimmers that left shortly before us. It was during Tim’s swim that I think many of us began to feel sea sick and retreated within ourselves to survive.
After Tim’s strong swim it was time for the brother and sister team of Trevor and Alexa to bring us to dawn and a beautiful sunrise to the east northeast towards the North Sea. There was no doubt that with this duo that the gap between us and the Water Buffalo’s widened. 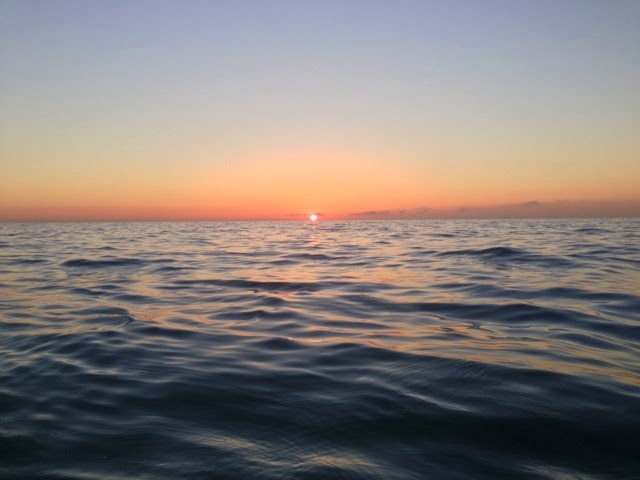 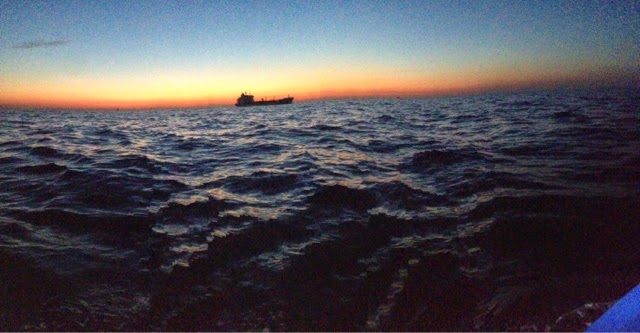 (Sunrise over the English Channel)

It seemed as though (at least for me) as we began our second legs that the groups sea sickness began to abate. Phew! I won’t recount the second leg for all but just share a few thoughts on my leg.  While I was excited to get back in the water again it is always a bit tough mentally to jump back into cold water. My memories of the second leg centered around the increased shipping traffic (tankers, ferries, cargo ships) to beginning to see faintly France ahead. I distinctly remember one time looking up and seeing in my peripheral vision ahead and to the right a big ship about to cross our path. All I could think was what type of wake will it make. Anecdotally, I heard from team members that some type of commincation was made to the tanker and they veered slightly away.
As we all finshed our second leg France was certainly in sight and as Rip was about to go in for his third leg Tim and I commented that at that distance it would take at least my leg and Tim’s leg to hit Cap Gris Nez. Rip was strong in his Stars and Stripes speedo, and by this point the other boats were a solid distance behind us.  I was sitting, talking and watching Rip swim and about half way through his swim the co-pilot came up to me and said I would be the last swimmer. The tides were apparently strong as we had covered a lot of ground.  I was stunned as France seemed close but not that close. I readied myself in the Stars and Stripes speedo and jumped into the water. I was told beforehand that I would swim for a bit and then I would follow then zodiac for as far as he could go and then I would swim to the rocky cap. With some shallow strokes I finally crawled onto the very sharp and rocky French coast!  The Viking Princess hit the Cap Gris Nez spot on. Wow-Four Buoys & a Girl did it!!!  I did a jig on the rocks waved to a French woman on the cliffs and swam back to the zodiac. 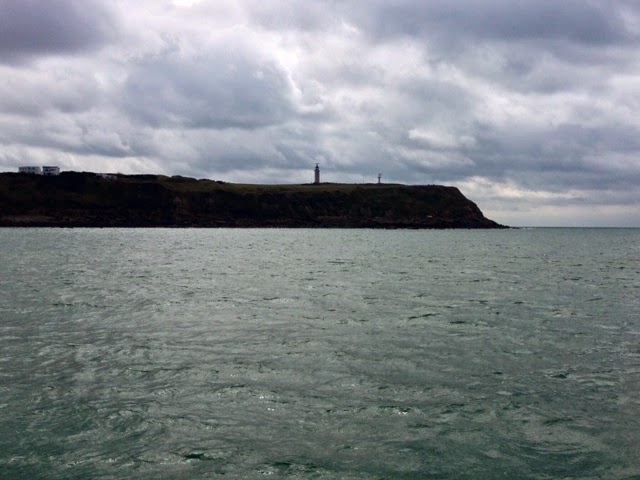 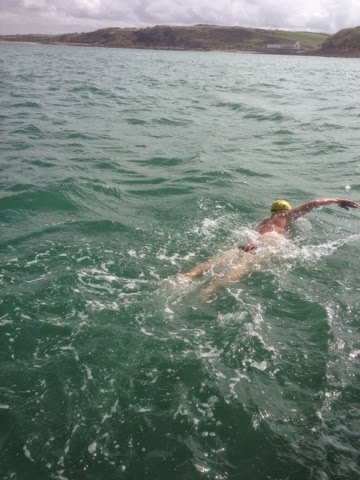 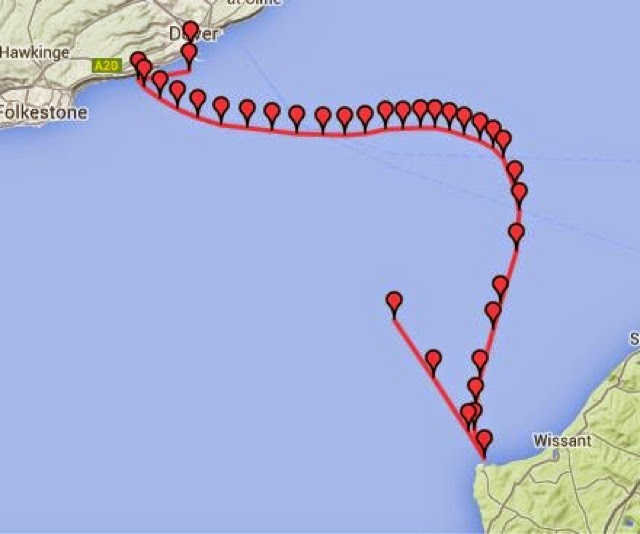 (Our course-we hit the Cap spot on)

The team hugged, high fived and Kay and Alexa popped the champagne (the sweetest bottle was the Tattinger we had nicked from the Water Buffalo’s) to celebrate! Captain Reg and the Viking Princess seemingly took a victory lap as the other swimmers and boats drew near the point. 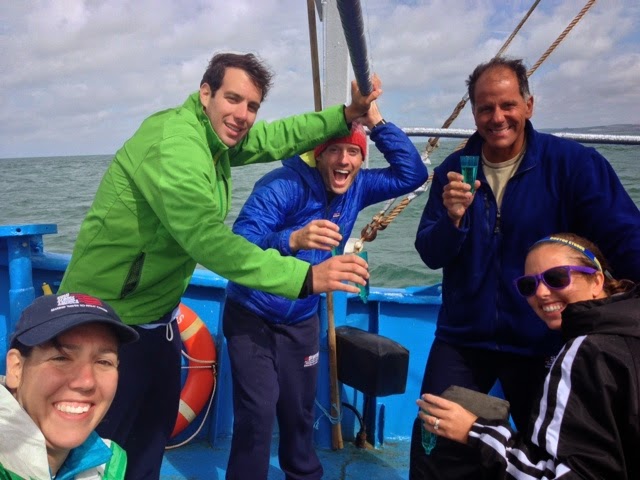 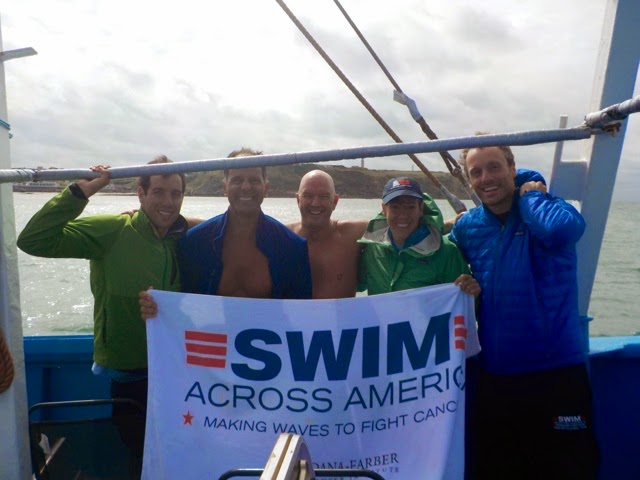 The 2.5 hour+ plus boat ride back to Dover was brutal. Rough seas, water everywhere and basically standing up the whole way home-ugh. The glow of our accomplishment is what kept our spirits high.
That night both teams celebrated at the White Horse Inn in Dover. Tradition holds that English Channel swimmers sign their names on the wall of this very old pub-we all certainly obliged! Coach Chloe also presented to our team a new award plaque that is slated to reside in the Channel Swimming Assoscation’s museum for fastest Charity Relay Team of the Year-way cool! 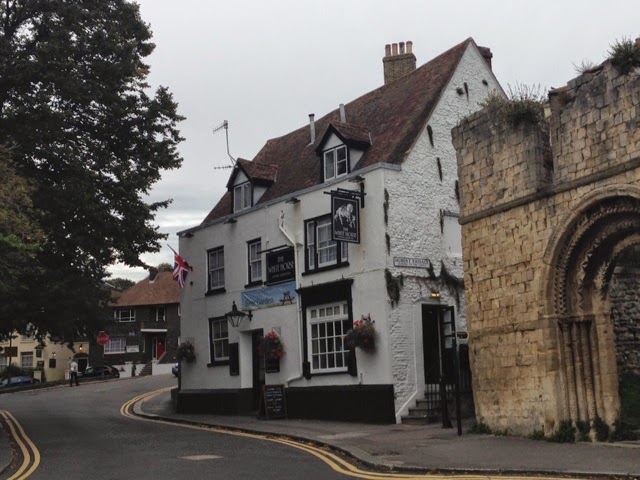 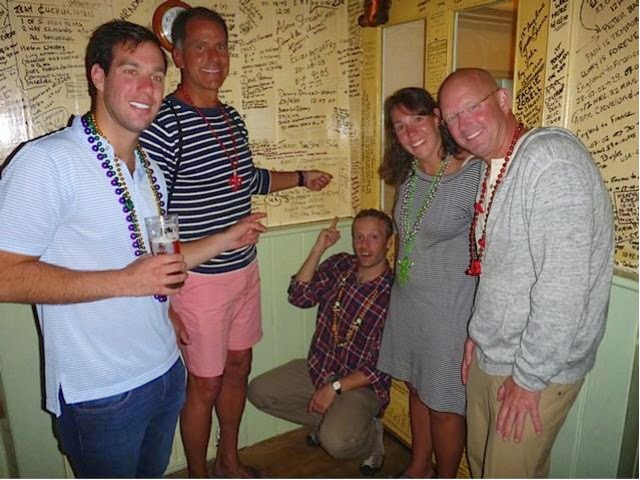 (Signing our names on the wall of the White Horse Inn)

We completed the swim in 11 hours and 13 minutes and were the first boat to France that day! Such a great day and memorable day (despite sea sickness).
Thanks to Swim Across America and the great work they do everyday to fight cancer. Janel and Kay-thank you for the opportunity and making this happen.
To my team mates and friends, Rip/Suzie, Tim, Trevor and Alexa-awesome day. Coach Chloe you are great. I appreciated all your  support and positive attitudes. I enjoyed sharing this lifetime memory with all of you. Mahalo!
And of course thank you to my wonderful family and my very patient, understanding and loving wife that indulges my small whims.
A solo crossing in the future…..hmmmm! 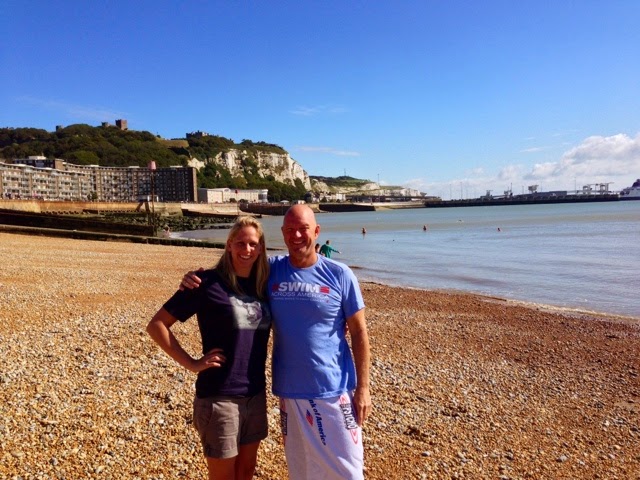 (Me and our chief cheerleader Coach Chloe) 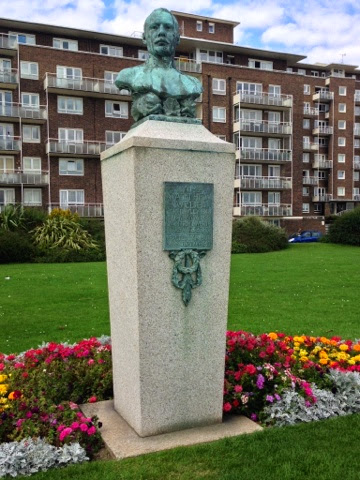 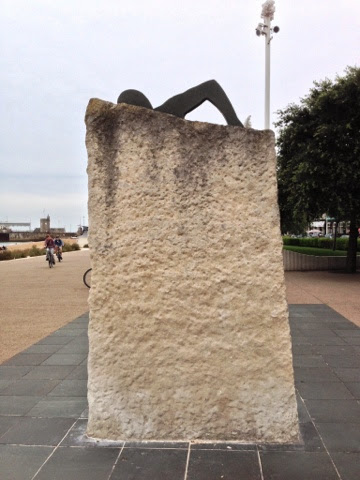